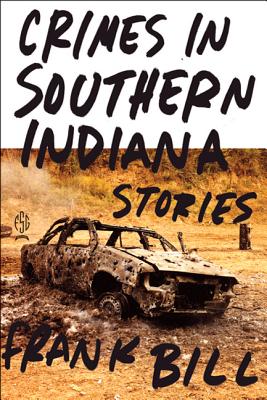 Crimes in Southern Indiana is the most blistering, vivid, flat-out fearless debut to plow into American literature in recent years. Frank Bill delivers what is both a wake-up call and a gut punch. Welcome to heartland America circa right about now, when the union jobs and family farms that kept the white on the picket fences have given way to meth labs, backwoods gunrunners, and bare-knuckle brawling.

Bill's people are pressed to the brink—and beyond. There is Scoot McCutchen, whose beloved wife falls terminally ill, leaving him with nothing to live for—which doesn't quite explain why he brutally murders her and her doctor and flees, or why, after years of running, he decides to turn himself in. In the title story, a man who has devolved from breeding hounds for hunting to training them for dog-fighting crosses paths with a Salvadoran gangbanger tasked with taking over the rural drug trade, but who mostly wants to grow old in peace. As Crimes in Southern Indiana unfolds, we witness the unspeakable, yet are compelled to find sympathy for the depraved.

Bill's southern Indiana is haunted with the deep, authentic sense of place that recalls the best of Southern fiction, but the interconnected stories bristle with the urban energy of a Chuck Palahniuk or a latter-day Nelson Algren and rush with the slam-bang plotting of pulp-noir crime writing à la Jim Thompson. Bill's prose is gritty yet literary, shocking, and impossible to put down. A dark evocation of the survivalist spirit of the working class, this is a brilliant debut by an important new voice.

“Bill's ever violent and never dull stories [are] a blend of Midwest Gothic and country pulp . . . [They're] over the top, but in a good way, in the way that Quentin Tarantino's first film, Reservoir Dogs, was over the top. Bill never cheats on the smells and sounds of carnage. . . . [T]his book delivers.” —The Seattle Times

“The hard- scrabble realism of these 17 stories will bring to mind the Ozark writer Daniel Woodrell and shades of Cormac McCarthy and Dorothy Allison--offering a view of American lives and mores that may as well be from a different planet . . . Rural idyll this is not--but it is as riveting as anything you may read in the near term.” —The Daily Beast (Best Debuts of the Fall list)

“Flowing like awful mud and written in pulpy style, these stories paint a grisly portrait of the author's homeland. You might want to have your brass knuckles handy when reading.” —Publishers Weekly

“This gritty, violent debut collection begins rather like pulp genre fiction then deepens into something much more significant and powerful. Set in a dilapidated, seedy, nightmare version of southern Indiana, complete with meth labs, dog-fighting rings, and all manner of substance abuse, the stories are connected by recurring characters. The collection opens with vignettes focused mainly on carnage.” —Library Journal

“Good Lord, where in the hell did this guy come from? Blasts off like a frigging rocket ship and hits as hard as an ax handle to the side of the head after you've eaten a live rattlesnake for breakfast. One of the wildest damn rides you're ever going to take inside a book.” —Donald Ray Pollock, author of Knockemstiff

“Frank Bill's characters all seem to be hurtling at ninety miles an hour down dead end streets, and his recounting of their passage is vivid and unforgettable. Like Barry Hannah on amphetamines, but the voice is undeniably Bill's own.” —William Gay, author of Provinces of Night

“What can I say about this book? This: planning a summer trip north from Mississippi, these stories caused me to reroute to avoid Southern Indiana. Mr. Bill knows his people well, and writes like they live--on the edge of the edge. Just plain unforgettable fiction.” —Tom Franklin, author of Crooked Letter, Crooked Letter

“When you're composing your hardbitten pantheon--Raymond Chandler, James M. Cain, Patricia Highsmith, Big Jim Thompson, Elmore Leonard--save room for Frank Bill, whose Crimes in Southern Indiana reminded me how thrilling and darkly vital crime fiction used to be and is again.” —Kyle Minor, author of In the Devil's Territory

“These stories form the ideal nexus between literary art and pulp fiction: beautifully crafted, compulsively readable, and as addictive as crystal meth.” —Pinckney Benedict, author of Dogs of God and The Wrecking Yard

“Take the bark of a .45, the growl of a rusted-out muffler, and the banshee howl of a methhead on a three-day bender, and you approximate the voice of Frank Bill, a startlingly talented writer whose stories rise from the same dark lyrical well as those of Daniel Woodrell and Dorothy Allison.” —Benjamin Percy, author of The Wilding and Refresh, Refresh

“How can I not love a writer whose work reminds me in a huge way of some of my favorite writers: Lansdale, Woodrell, Willeford, Thompson, and Faulkner? Crimes in Southern Indiana is a brutal, hilarious, honest, unforgettable book, and Frank Bill is the freshest new voice to emerge on the crime fiction scene in recent years.” —Jason Starr, author of The Pack

“Say you're driving down a country road, midnight, a beer in your lap, and you corner into a two-car head-on collision that's one of the most horrible things you've ever seen, so horrible that you've just gotta stop, and then, say, when you've gotten out and you're poking around the body parts trying to figure out what's what, you turn your head just right and catch the way the moonlight lays glittering over the twisted metal and bloodslick asphalt, and you're struck breathless by the eerie beauty of it all. That's what Frank Bill's writing is like. It's that stark, that brutal, and just that beautiful.” —Benjamin Whitmer, author of Pike

“Frank Bill does to crime fiction what a rabid pit bull does to his favorite chew toy. You'll need a neck brace after whipping through these wild, wonderful, whacked-out stories.” —Derek Nikitas, author of Pyres

“Crimes in Southern Indiana brings to light a major American writer of fiction, the prose equivalent of a performance by Warren Oates or a song by Merle Haggard or a photograph by Walker Evans. Tempting though it is to compare him to other writers, the fact is that five years hence every good new fiction writer to come into view will be compared to Frank Bill.” —Scott Phillips, author of The Ice Harvest

“The first time I read a story by Frank Bill it was like watching a redneck opera in another language. No idea what was going on, but I was dying to find out. I wanted more, more, more until I finally learned how to speak 'Frank Bill.' He is a completely original voice in the literary arena, and will take on any challengers with his bare hands. I'm continually in awe of the stories he tells and the insane way he tells them.” —Anthony Neil Smith, author of Yellow Medicine and Hogdoggin'