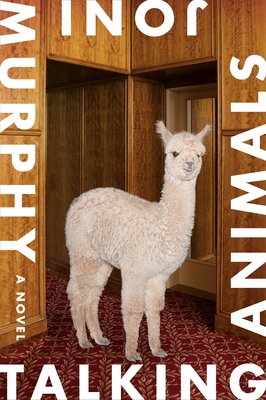 "Joni Murphy’s inventive and beautiful allegory depicts a city enmeshed in climate collapse, blinded to the signs of its imminent destruction by petty hatreds and monstrous greed: that is, the world we are living in now. Talking Animals is an Orwellian tale of totalitarianism in action, but the animals on this farm are much cuter, and they make better puns." —Chris Kraus, author of I Love Dick and After Kathy Acker

A fable for our times, Joni Murphy’s Talking Animals takes place in an all-animal world where creatures rather like us are forced to deal with an all-too-familiar landscape of soul-crushing jobs, polluted oceans, and a creeping sense of doom.

It’s New York City, nowish. Lemurs brew espresso. Birds tend bar. There are bears on Wall Street, and a billionaire racehorse is mayor. Sea creatures are viewed with fear and disgust and there’s chatter about building a wall to keep them out.

Alfonzo is a moody alpaca. His friend Mitchell is a sociable llama. They both work at City Hall, but their true passions are noise music and underground politics. Partly to meet girls, partly because the world might be ending, these lowly bureaucrats embark on an unlikely mission to expose the corrupt system that’s destroying the city from within. Their project takes them from the city’s bowels to its extremities, where they encounter the Sea Equality Revolutionary Front, who are either a group of dangerous radicals or an inspiring liberation movement.

In this novel, at last, nature kvetches and grieves, while talking animals offer us a kind of solace in the guise of dumb jokes. This is mass extinction as told by BoJack Horseman. This is The Fantastic Mr. Fox journeying through Kafka's Amerika. This is dogs and cats, living together. Talking Animals is an urgent allegory about friendship, art, and the elemental struggle to change one’s life under the low ceiling of capitalism.

Joni Murphy is a writer from New Mexico who lives in New York. Her debut novel Double Teenage was published in 2016. It was named one of The Globe and Mail's 100 Best Books of 2016.

"Come for the cover, which depicts a thoughtful alpaca, and stay for the tale of intrigue, climate change, and metropolitan doom—all in a world without humans. Sounds nice right now!"
—Vulture, "29 Books We Can't Wait to Read This Summer" 2020

"A 21st-century combination of Animal Farm and Aesop's Fables . . . Murphy packs a lot of issues—class, climate change immigration, vegetarianism, and more—into a familiar plot about malfeasance. She balances her poetic ruminations and dogmatic lecturing with a goofy relish for puns . . . Weird yet engrossing and hard to forget."
—Kirkus (starred)

"Joni Murphy's second novel, Talking Animals, is as remarkable as her first, Double Teenage, which moved 'with stealth and intelligence against the North American landscape.' Talking Animals envisions an alternate history of Manhattan, this one cultivated by animals, but sans us human animals . . . The result is devilishly funny and sharply prescient, an Animal Farm for our times."
—The Millions

"Talking Animals is as much a paean to New York City as it is a brutal skewering of it. That’s not a contradiction: The beauty and glamour of NYC are inextricable from the destruction it’s caused. But the characters, who come to epiphanies regarding their society and empathize with those who have been suffocated for too long, reject that easy, lazy, immoral nihilism is the answer. The world is awful, but we owe it to ourselves and those we love to fight for those oppressed, to create a safer, more just world. We made the mess we live in today. But we can still do our best to clean it up, even if we’re just an alpaca."
—Slate

"Set in a world as cruel and complex as our own, Joni Murphy's Talking Animals erases the illusory distinction between man and beast. This tale of lonesome hearts, rising seas, and political intrigue is not only engrossing and finely wrought, it carries a message of survival: we're all in this together, and we need each other."
—Lisa Locascio, author of Open Me

"Absurd and irreverent, Talking Animals is a wild love letter to all bureaucrats, academics, and alpacas of the anthropocene. Joni Murphy, rightful zookeeper-heir to Kafka's animal kingdom, speaks for us all."
—Patty Yumi Cotrell, author of Sorry to Disrupt the Peace

"The long effort to raise human life above all else comes to a merciful end in Joni Murphy’s Talking Animals. Grief, inequality, the possibility of liberation: Murphy sings a song 'not kind, just true.' This is a rare novel, one with the humane gift of humor—and real urgency. And rarest of all, it's a novel we need."
—Andrew Durbin, author of MacArthur Park

“The best NYC novel since The Puttermesser Papers, Murphy’s wise and hilarious Talking Animals bobs along the wake of the present and coming flood like some driftwood ark of sibylline genius. Its beasts reveal ourselves: the mercenaries, the easily complicit, the legion of sheep and lemmings (no offense), and the rarely defiant. Read it; after all, the sky is falling.”
—Eugene Lim, author of Dear Cyborgs

"A thrillingly imaginative zoological fantasia vivid with fierce intelligence, caustic observation, and sly humor. The concrete jungle has never felt so funny, so unexpected, and so wonderfully humane."
—Elan Mastai, author of All Our Wrongs Today