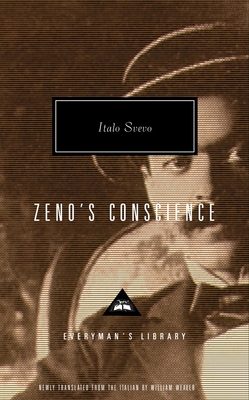 By Italo Svevo, William Weaver (Translated by), William Weaver (Introduction by), Elizabeth Hardwick (Preface by)
$24.00
Backordered. Place an order and we will let you know when to expect your book.

The modern Italian classic discovered and championed by James Joyce, Zeno’s Conscience is a marvel of psychological insight, published here in a fine new translation by William Weaver–the first in more than seventy years.

Italo Svevo’s masterpiece tells the story of a hapless, doubting, guilt-ridden man paralyzed by fits of ecstasy and despair and tickled by his own cleverness. His doctor advises him, as a form of therapy, to write his memoirs; in doing so, Zeno reconstructs and ultimately reshapes the events of his life into a palatable reality for himself–a reality, however, founded on compromise, delusion, and rationalization.

With cigarette in hand, Zeno sets out in search of health and happiness, hoping along the way to free himself from countless vices, not least of which is his accursed “last cigarette!” (Zeno’s famously ineffectual refrain is inevitably followed by a lapse in resolve.) His amorous wanderings win him the shrill affections of an aspiring coloratura, and his confidence in his financial savoir-faire involves him in a hopeless speculative enterprise. Meanwhile, his trusting wife reliably awaits his return at appointed mealtimes.

Zeno’s adventures rise to antic heights in this pioneering psychoanalytic novel, as his restlessly self-preserving commentary inventively embroiders the truth. Absorbing and devilishly entertaining, Zeno’s Conscience is at once a comedy of errors, a sly testimonial to the joys of procrastination, and a surpassingly lucid vision of human nature by one of the most important Italian literary figures of the twentieth century.

Italo Svevo is the pseudonym of Ettore Schmitz (1861—1928), a Trieste businessman who won literary recognition late in life as the model for Leopold Bloom in James Joyce’s Ulysses.

William Weaver has translated the works of Umberto Eco, Primo Levi, Italo Calvino, and Roberto Calasso, among others. He is a professor at Bard College. His translation of Calvino’s If on a Winter’s Night a Traveler is available from Everyman’s Library.

“Italo Svevo remains, with Joyce, Proust, and Kafka, one of the four unrivaled figures of twentieth-century literature. An accomplished ironist, a complex visionary of the modern soul, an anatomist whose scalpel is as fierce as it is compassionate, Svevo is without a doubt Italy’s most serious modern novelist. From the self-deceived protagonist who forswears each of his attempts to give up cigarettes, to the final detonation which seems uncannily prescient of our atomic age, Zeno’s Conscience, in the expert hands of William Weaver’s elegant and vigorous translation, reminds us ever again that if there is one phrase we should confer on Svevo it would be this: Svevo, our contemporary.” – André Aciman