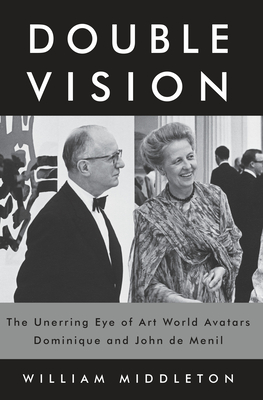 The first and definitive biography of the celebrated collectors Dominique and John de Menil, who became one of the greatest cultural forces of the twentieth century through groundbreaking exhibits of art, artistic scholarship, the creation of innovative galleries and museums, and work with civil rights.

Dominique and John de Menil created an oasis of culture in their Philip Johnson-designed house with everyone from Marlene Dietrich and René Magritte to Andy Warhol and Jasper Johns. In Houston, they built the Menil Collection, the Rothko Chapel, the Byzantine Fresco Chapel, the Cy Twombly Gallery, and underwrote the Contemporary Arts Museum.
Now, with unprecedented access to family archives, William Middleton has written a sweeping biography of this unique couple. From their ancestors in Normandy and Alsace, to their own early years in France, and their travels in South America before settling in Houston. We see them introduced to the artists in Europe and America whose works they would collect, and we see how, by the 1960s, their collection had grown to include 17,000 paintings, sculptures, drawings, photographs, rare books, and decorative objects.
And here is, as well, a vivid behind-the-scenes look at the art world of the twentieth century and the enormous influence the de Menils wielded through what they collected and built and through the causes they believed in.

WILLIAM MIDDLETON is a journalist and editor who has worked in New York and Paris. He has been the Fashion Features Director for Harper's Bazaar and the Paris Bureau Chief for Fairchild Publications, overseeing W Magazine and Women's Wear Daily. He has written for The New York Times, The New York Times Magazine, Vogue, House & Garden, Esquire, Texas Monthly, Travel & Leisure, Departures, and the International Herald Tribune.

“In this scrupulously detailed and admiring biography, William Middleton chronicles the achievements of this couple whose mission in life was to share their passion for art…Wonderfully illustrated.”
—Meryle Secrest, The Wall Street Journal

“In this fastidiously researched double biography…Middleton traces the couple’s inimitable aesthetic vision back to their eighteenth-century Enlightenment and industrialist ancestors…this authoritative biography correctly argues for the crucial role that patrons continue to play in shaping the art world and relays and supports the Menils’ inspiring belief in the necessity of art for the common good.”
—Booklist

“An authoritative account of the lives and patronage of 20th-century art-world power-couple Dominique and John de Menil…As Middleton dutifully shows, the couple’s commitment to art and philanthropy defined their lives…. This exhaustively researched, satisfying slab of a book offers a thorough look into the lives and influence of an extraordinary couple.”
—Publishers Weekly

“Middleton spares no details in this history of the French couple who made Houston their home and converted it to a center of the arts… A well-written, highly informative book for devotees of the modern art world.”
—Kirkus Reviews

“I thought nothing could equal visiting the Menil Collection and the legendary Dominique and John de Menil’s house and other properties in Houston, but William Middleton’s brilliant evocation of a different time and formidable ethos, is so extraordinary an achievement that the famous couple not only live again, but so do their dazzling accomplishments. A glorious book.”
—Hilton Als, author of Alice Neel: Uptown

“There cannot be a better moment for us to be reminded of the principled, visionary art patronage and extraordinary contribution to the cultural legacy of the 20th century made by Dominique and John de Menil. With exquisite sensitivity to atmosphere and detail, William Middleton’s dual biography is resoundingly alive. It’s a story for the ages—good for the soul.”
—Tilda Swinton