Tell Me How Long the Train's Been Gone (Vintage International) (Paperback) 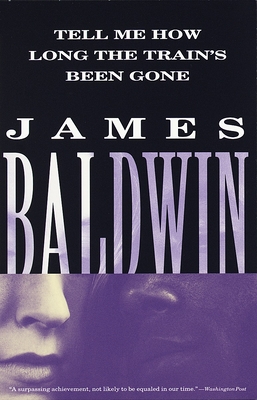 It’s hard for me to explain why I love this novel so much because it feels so personal. There isn’t a reason it should be – this story is about a specific time and place and I am not a black man from Harlem trying to become an actor in the 1940s. But I am always drawn back for more Baldwin because his writing is so extraordinary that I somehow feel like he is telling my own story. There’s a paragraph that’s been repeating in my mind like a song that gets stuck in your head. I don’t think a book has gotten so under my skin like this one, at least not in a very long time. It’s like a great Russian novel in that it tackles all the heavy-hitting subjects – religion, violence, sex, race, injustice, love – except, of course, it is uniquely American.

A major work of American literature that powerfully portrays the anguish of being Black in a society that at times seems poised on the brink of total racial war.

At the height of his theatrical career, the actor Leo Proudhammer is nearly felled by a heart attack. As he hovers between life and death, Baldwin shows the choices that have made him enviably famous and terrifyingly vulnerable.

For between Leo's childhood on the streets of Harlem and his arrival into the intoxicating world of the theater lies a wilderness of desire and loss, shame and rage. An adored older brother vanishes into prison. There are love affairs with a white woman and a younger black man, each of whom will make irresistible claims on Leo's loyalty.

Tell Me How Long the Train's Been Gone is overpowering in its vitality and extravagant in the intensity of its feeling.

James Baldwin (1924–1987) was a novelist, essayist, playwright, poet, and social critic. His first novel, Go Tell It on the Mountain, appeared in 1953 to excellent reviews, and his essay collections Notes of a Native Son and The Fire Next Time were bestsellers that made him an influential figure in the growing civil rights movement. Baldwin spent much of his life in France, where he moved to escape the racism and homophobia of the United States. He died in France in 1987, a year after being made a Commander of the French Legion of Honor.

"Baldwin is one of the few genuinely indispensable American writers." —Saturday Review

"He has not himself lost access to the sources of his being—which is what makes him read and awaited by perhaps a wider range of people than any other major American writer." —The Nation