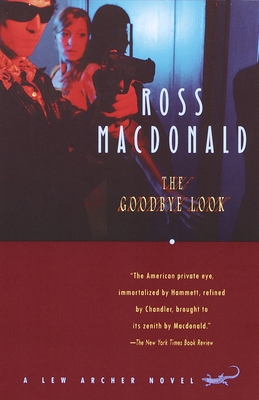 This is book number 15 in the Lew Archer Series series.

In The Goodbye Look, Lew Archer is hired to investigate a burglary at the mission-style mansion of Irene and Larry Chalmers. The prime suspect, their son Nick, has a talent for disappearing, and the Chalmerses are a family with money and memories to burn. As Archer zeros in on Nick, he discovers a troubled blonde, a stash of wartime letters, a mysterious hobo. Then a stiff turns up in a car on an empty beach. And Nick turns up with a Colt .45. In The Goodbye Look, Ross Macdonald delves into the world of the rich and the troubled and reveals that the past has a deadly way of catching up to the present.

If any writer can be said to have inherited the mantle of Dashiell Hammett and Raymond Chandler, it is Ross Macdonald. Between the late 1940s and his death in 1983, he gave the American crime novel a psychological depth and moral complexity that his pre-decessors had only hinted at. And in the character of Lew Archer, Macdonald redefined the private eye as a roving conscience who walks the treacherous frontier between criminal guilt and human sin.

"The American private eye, immortalized by Hammett, refined by Chandler, brought to its zenith by Macdonald." --The New York Times Book Review

"Another of Mr. Macdonald's somber celebrations of the evil that lurks in men's souls. . .as elaborately designed as the plot of any three-volume Victorian novel." --The Christian Science Monitor

"It was not just that Ross Macdonald taught us how to write; he did something more, he taught us how to read, and how to think about life, and maybe, in some small, but mattering way, how to live . . . . I owe him." -Robert B. Parker