Epitaph for a Spy: A Spy Thriller (Paperback) 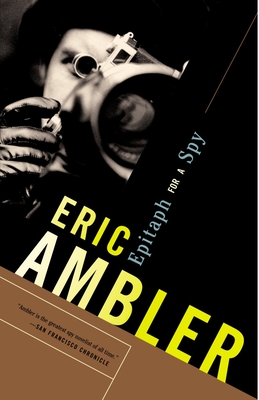 When Josef Vadassy arrives at the Hotel de la Reserve at the end of his Riviera holiday, he is simply looking forward to a few more days of relaxation before returning to Paris. But in St. Gatien, on the eve of World War II, everyone is suspect–the American brother and sister, the expatriate Brits, and the German gentleman traveling under at least one assumed name. When the film he drops off at the chemist reveals photographs he has not taken, Vadassy finds himself the object of intense suspicion. The result is anything but the rest he had been hoping for.

Eric Ambler is often said to have invented the modern suspense novel. Beginning in 1936, he wrote a series of novels that introduced ordinary protagonists thrust into political intrigue they were ill-prepared to deal with. These novels were touted for their realism, and Ambler established himself as a thriller writer of depth and originality. In the process he paved the way for such writers as John Le Carre, Len Deighton, and Robert Ludlum.

“Ambler is the greatest spy novelist of all time.” --San Francisco Chronicle

“A genuine classic.” --The Times (London)