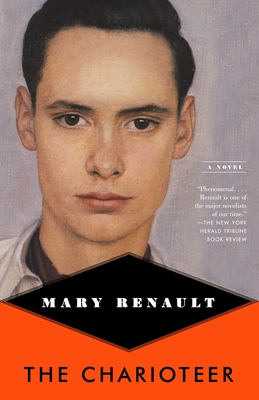 After enduring an injury at Dunkirk during World War II, Laurie Odell is sent to a rural veterans’ hospital in England to convalesce. There he befriends the young, bright Andrew, a conscientious objector serving as an orderly. As they find solace and companionship together in the idyllic surroundings of the hospital, their friendship blooms into a discreet, chaste romance. Then one day, Ralph Lanyon, a mentor from Laurie’s schoolboy days, suddenly reappears in Laurie’s life, and draws him into a tight-knit social circle of world-weary gay men. Laurie is forced to choose between the sweet ideals of innocence and the distinct pleasures of experience.

Originally published in the United States in 1959, The Charioteer is a bold, unapologetic portrayal of male homosexuality during World War II that stands with Gore Vidal’s The City and the Pillar and Christopher Isherwood’s Berlin Stories as a monumental work in gay literature.

Mary Renault was born in London and educated at Oxford. She then trained for three years as a nurse, and wrote her first published novel, Promise of Love. Her next three novels were written while serving in WWII. After the war, she settled in South Africa and traveled considerably in Africa and Greece. It was at this time that she began writing her brilliant historical reconstructions of ancient Greece, including The King Must Die, The Last of the Wine, and The Persian Boy. She died in Cape Town in 1983.

“Phenomenal. . . . Renault is one of the major novelists of our time.” —New York Herald Tribune Book Review

“Miss Renault masters a lyrical style, meticulous and probing, and introduces us into a world of emotions so delicate and private that the reader often feels like an intruder.” —The New York Times

“Tribute must be paid Miss Renault for remarkable literary talents. Her prose, at its best, is dazzling, her perceptions sharp and original, her dialogue natural to the ear.” —Saturday Review