He Shall Thunder in the Sky: (Mass Market) 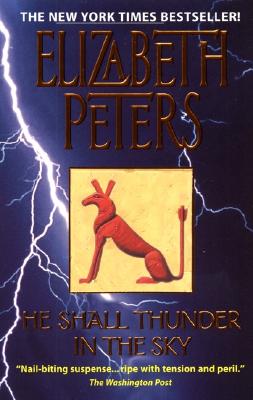 By Elizabeth Peters
$7.99
Not available to order.

“Passion among the pyramids. Forged antiquities. A country at war. A camel in the garden. A cameo by Lawrence of Arabia. Add in Peters’s trademark intelligent plotting, engaging characters, and stylish writing and we can hardly ask for anything more.”

One of the most beloved characters in mystery/suspense fiction, archeologist and Egyptologist Amelia Peabody bravely faces gravest peril in Cairo on the eve of World War One in New York Times bestselling Grandmaster Elizabeth Peters’s magnificent Egyptian adventure, He Shall Thunder in the Sky. The San Francisco Examiner calls these heart-racing exploits of Amelia and her courageous family, the Emersons, “pure delight.” But perhaps the New York Times Book Review states it best: “Between Amelia Peabody and Indiana Jones, it’s Amelia—in wit and daring—by a landslide.”