Above the East China Sea (Hardcover) 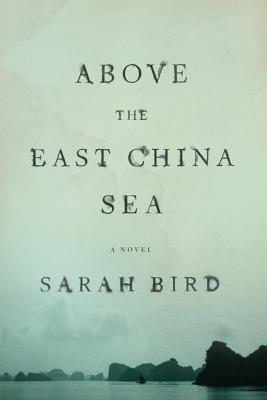 A "Seattle Times" Best Book of the Year
In her most ambitious, moving, and provocative novel to date, Sarah Bird makes a stunning departure. "Above the East China Sea "tells the entwined stories of two teenaged girls, an American and an Okinawan, whose lives are connected across seventy years by the shared experience of profound loss, the enduring strength of an ancient culture, and the redeeming power of family love.
Luz James, a contemporary U.S. Air Force brat, lives with her strictly-by-the-rules sergeant mother at Kadena Air Base in Okianawa. Luz's older sister, her best friend and emotional center, has just been killed in the Afghan war. Unmoored by her sister's death and a lifetime of constant moving from base to base, Luz turns for the comfort her service-hardened mother cannot offer to the Smokinawans, the waste cases, who gather to get high every night in a deserted cove. When even pills, one-hitters, Cuervo Gold, and a growing crush on Jake Furusato aren t enough to soften the unbearable edge, the desolate girl contemplates taking her own life.
In 1945, Tamiko Kokuba, along with two hundred of her classmates, is plucked out of her elite girls high school and trained to work in the Imperial Army's horrific cave hospitals. With defeat certain, Tamiko finds herself squeezed between the occupying Japanese and the invading Americans. She believes she has lost her entire family, as well as the island paradise she so loved, and, like Luz, she aches with a desire to be reunited with her beloved sister.
On an island where the spirits of the dead are part of life and your entire clan waits for you in the afterworld, suicide offers Tamiko the promise of peace. As Luz tracks down the story of her own Okinawan grandmother, she discovers that, if she surrenders to the most "un"brat impulse and allows herself to connect completely with a place and its people, the ancestral spirits will save not only Tamiko but her as well.
Propelled by a riveting narrative and set at the very epicenter of the headline-grabbing clash now emerging between the great powers, "Above the East China Sea "is at once a remarkable chronicle of how war shapes the lives of conquerors as well as the conquered and a deeply moving account of family, friendship, and love that transcends time.

Sarah Bird is the author of" The Yokota Officers Club" and eight other novels. She grew up on air force bases around the world and now makes her home in Austin, Texas. She is a columnist for "Texas Monthly" and has contributed to other magazines, including "O, The Oprah Magazine; The New York Times Magazine "and" Real Simple."

Advance Praise for Sarah Bird's Above the East China Sea

"Above the East China Sea is Sarah Bird's most powerful novel yet.  This tour de force of historical imagination cuts between the bloody, beleaguered Okinawa of 1945 and its seemingly peaceful incarnation in the present time.  But the island is far from peaceful; beneath the surface of things, war continues to roil and trouble this profoundly damaged place.  By interweaving the stories of two young women separated by time and culture, Bird has given us a profoundly moving meditation on war, family, love, and what might be waiting for us on the other side of loss."


“Sarah Bird, a brilliant and accomplished novelist, has topped herself with this uncommonly powerful, beautifully rendered novel. Above the East China Sea is a compelling tale of love, loss, and the desperate search for closure, wrapped in a gripping mystery that must be worked out against the backdrop of a fascinating culture that is as little known to Americans as it is important.  This book rings true on all its levels. From the stresses of a military family to the banter of American teens. From the power of an ancient culture to the tragedy of war and its aftermath.  This story is unlike any I’ve read before. I will never think of Okinawa, or war, or belonging, in the same way again. Above the East China Sea will stay with me forever.”

--Mary Wertsch, Military Brats: Legacies of Childhood Inside the Fortress

“Informed by her research in Okinawa’s history and literature, novelist Sarah Bird combines the saga of an Okinawan high school girl drafted to serve in 1945 as a combat medic during the Battle of Okinawa with the story of an American military dependent sent with her family to the vast complex of U.S. bases in Okinawa where troops train today for the war in Afghanistan. The loss of family members in war and rituals for communicating with spirits of the dead connect these two narratives which take place in disparate times and cultures, but in the same lush environment of this sub-tropical island.  Bird portrays characters among Okinawans from many walks of life in the 1930s and 1940s with remarkable fullness and credibility.  This double drama held me rapt throughout, enhanced by the author’s first-hand knowledge of growing up in a military family overseas and her ever-sharp ear for raw and raunchy teenage dialogue.”
--Steve Rabson, Professor Emeritus of East Asian Studies, Brown University