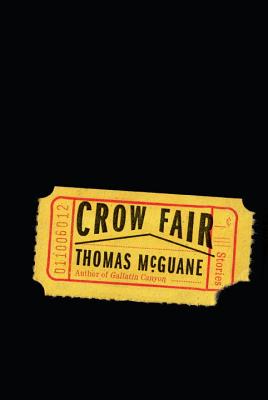 By Thomas Mcguane
Unavailable. Orders will be auto-cancelled.

From one of our most deeply admired storytellers, author of the richly acclaimed Gallatin Canyon, his first collection in nine years.

Set in Thomas McGuane’s accustomed Big Sky country, with its mesmeric powers, these stories attest to the generous compass of his fellow feeling, as well as to his unique way with words and the comic genius that has inspired comparison with Twain and Gogol. The ties of family make for uncomfortable binds: A devoted son is horrified to discover his mother’s antics before she slipped into dementia. A father’s outdoor skills are no match for an ominous change in the weather. But complications arise equally in the absence of blood, as when lifelong friends on a fishing trip finally confront their deep dislike for each other. Or when a gifted traveling cattle breeder succumbs to the lure of a stranger’s offer of easy money. McGuane is as witty and large-hearted as we have ever known him—a jubilant, thunderous confirmation of his status as a modern master.

Thomas McGuane lives in McLeod, Montana. He is a member of the American Academy of Arts and Letters and the author of ten novels, three works of nonfiction, and two other collections of stories.

Thomas McGuane’s The Bushwacked Piano, The Cadence of Grass, Driving on the Rim, Gallatin Canyon, Keep the Change, The Longest Silence, Ninety-two in the Shade, Nobody’s Angel, Nothing but Blue Skies, Panama, Some Horses, Something to Be Desired, The Sporting Club, and To Skin a Cat are available in Vintage paperback.

“Mysterious and illuminating . . . [McGuane] alternately pounds, kneads, works and reworks his material, shedding his tears into it and wrenching away, peeling and scraping it off his hands in a fruitless attempt to escape; then, wretched but indefatigable, going back to knead it again. This obsessive labor seems to change the molecular structure of the substance, from clay to a kind of porcelain . . . [McGuane] has honed a kind of bluff Western comedy of masculinity [and] turns muck into art, which takes wing in flights of ingenuity.”
—Atticus Lish, The New York Times Book Review

“Dazzling . . . McGuane rustles up some of his best stories yet . . . [and] continues to burnish his reputation with some of his most accomplished fiction to date.”
—O Magazine

“One of McGuane’s great gifts is the ability to elicit laughter in dark moments or to jolt the reader of an ostensibly comic tale with a knife twist of pathos or tragedy . . . the only thing [the reader] can expect is to be surprised – by McGuane’s deadpan wit, his hyperactive imagination, and his deep appreciation for the human comedy . . . [Crow Fair] serves not merely to make us gape or laugh at man’s essential weirdness but also to recognize a bit of it in ourselves.”
—Stefan Beck, The Christian Science Monitor

“McGuane has both honed the edge of his already sharp tone and, paradoxically, become more sympathetic to the human condition . . . [he] gives us well-rounded women alongside the men, making for a rich and fascinating portrait of Montana — with hungry bears and fighting trout as wonderful extras.”
—Alan Cheuse, NPR

“McGuane’s Montana retains wistful and ironic echoes of the Old West . . . with imagery as sparse and striking as the landscape . . . [These] stories highlight the detachment of young from old, husband from wife, neighbor from neighbor, the dying from life itself . . . [through] many funny, sad, and awful, awfully human moments.”
—Publishers Weekly (starred review)

“Glum, gleeful, brilliant . . . McGuane’s stories are about the wacked-out order men and women assign to things, but it’s not the true order and merely contributes to a larger confusion that is not far from horror . . . Backdoor irony, you might call it, mixed with black humor.”
—John Mort, Booklist (starred review)

“A slyly cutting batch of tales from a contemporary master . . . Seventeen stories, straightforward but well-crafted, that cement McGuane’s reputation as the finest short story writer of Big Sky country . . . The conflicts throughout this book are age-old . . . but McGuane’s clean writing and psychological acuity enliven them all.”
—Kirkus (starred review)