The Imagineers of War: The Untold Story of DARPA, the Pentagon Agency That Changed the World (Hardcover) 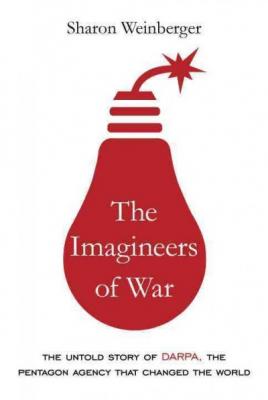 By Sharon Weinberger
$32.50
Email or call for price.

The definitive history of the Defense Advanced Research Projects Agency, the Pentagon agency that has quietly shaped war and technology for nearly sixty years.

Founded in 1958 in response to the launch of Sputnik, the agency’s original mission was to create “the unimagined weapons of the future.” Over the decades, DARPA has been responsible for countless inventions and technologies that extend well beyond military technology. Sharon Weinberger gives us a riveting account of DARPA’s successes and failures, its remarkable innovations, and its wild-eyed schemes. We see how the threat of nuclear Armageddon sparked investment in computer networking, leading to the Internet, as well as to a proposal to power a missile-destroying particle beam by draining the Great Lakes. We learn how DARPA was responsible during the Vietnam War for both Agent Orange and the development of the world’s first armed drones, and how after 9/11 the agency sparked a national controversy over surveillance with its data-mining research. And we see how DARPA’s success with self-driving cars was followed by disappointing contributions to the Afghanistan and Iraq wars.

Weinberger has interviewed more than one hundred former Pentagon officials and scientists involved in DARPA’s projects—many of whom have never spoken publicly about their work with the agency—and pored over countless declassified records from archives around the country, documents obtained under the Freedom of Information Act, and exclusive materials provided by sources. The Imagineers of War is a compelling and groundbreaking history in which science, technology, and politics collide.

SHARON WEINBERGER is Executive Editor at Foreign Policy and the author of Imaginary Weapons: A Journey Through the Pentagon's Scientific Underworld. She is currently a fellow at the Radcliffe Institute for Advanced Study at Harvard University and a Global Fellow at the Woodrow Wilson International Center for Scholars. She has also held fellowships at MIT's Knight Science Journalism program, the International Reporting Program at Johns Hopkins Paul H. Nitze School of Advanced International Studies, and Northwestern University's Medill School of Journalism. She has written on military science and technology for Nature, BBC, Discover, Slate, Wired, and The Washington Post, among others.

“Excellent… A warning worth heeding… Weinberger…has cracked much of the secrecy that surrounds DARPA. [She] is especially deft in tracing how drones went from their early days in spotting and tracking Viet Cong fighters in the jungle to today, where they are part of the foundation of modern warfare.”
—Ray Locker, USA Today

“Groundbreaking.... Provides a glimpse into the history of war itself through the lens of an agency that bills itself as trying to ‘prevent and create surprise.’.... The best kind of airport thriller.”
—The New Scientist

"[A] defining behind-the-scenes look at the confluence of defense politics and technological prowess. Exploring silly schemes as well as sensible ideas, distinguished military science and technology expert Weinberger profiles the crusaders who thought outside the box in service to their country and their own limitless creativity."
—Carol Haggas, Booklist

"Her account is critical but not mocking…a well-researched contribution to the history of U.S. military technology."
—Lawrence D. Freedman, Foreign Affairs

"They are the wizards of war, the faceless scientists who fight the battles of the future in lab coats instead of body armor, turning insects into remote control cyborgs and designing warships without crews.  In her new book, Sharon Weinberger has placed one of the government’s most secret laboratories, DARPA, under an electron microscope and discovered a world far beyond anyone’s imagination."
—James Bamford, bestselling author of The Shadow Factory: The Ultra-Secret NSA, from 9/11 to the Eavesdropping on America.

"From the Internet of today to the robots of tomorrow, DARPA has shaped not just the technology of war, but our day to day lives. Sharon Weinberger's The Imagineers of War lays out its untold history in an easy and informative read, along the way, reshaping the way you will look at events that range from the Vietnam War to the War on Terror."
—P.W. Singer, author of Ghost Fleet and Wired for War

"[A] fascinating and absorbing history… Weinberger’s account, based on extensive and meticulous research, reveals surprising twists in the recent history of the age-old entanglement between knowledge and power."
—David Kaiser, Nature Research

"A deep organizational history rather than a technological chronicle. [Weinberger] scours reams of archival material and interviews former officials…revealing a highly secretive organization with a fittingly mixed legacy."
—Publishers Weekly