I Think You're Totally Wrong: A Quarrel (Hardcover) 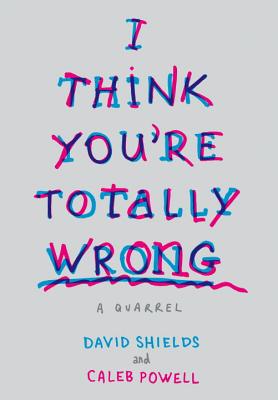 An impassioned, funny, probing, fiercely inconclusive, nearly-to-the-death debate about life and art beers included.
Caleb Powell always wanted to become an artist, but he overcommitted to life (he's a stay-at-home dad to three young girls), whereas his former professor David Shields always wanted to become a human being, but he overcommitted to art (he has five books coming out in the next year and a half). Shields and Powell spend four days together at a cabin in the Cascade Mountains, playing chess, shooting hoops, hiking to lakes and an abandoned mine; they rewatch My Dinner with Andre and The Trip, relax in a hot tub, and talk about everything they can think of in the name of exploring and debating their central question (life and/or art?): marriage, family, sports, sex, happiness, drugs, death, betrayal and, of course, writers and writing.
The relationship the balance of power between Shields and Powell is in constant flux, as two egos try to undermine each other, two personalities overlap and collapse. This book seeks to deconstruct the Q&A format, which has roots as deep as Plato and Socrates and as wide as Laurel and Hardy, Beckett's Didi and Gogo, and Car Talk's Magliozzi brothers. I Think You re Totally Wrong also seeks to confound, as much as possible, the divisions between reality and fiction, between life and art. There are no teachers or students here, no interviewers or interviewees, no masters in the universe only a chasm of uncertainty, in a dialogue that remains dazzlingly provocative and entertaining from start to finish.
James Franco's adaptation of I Think You're Totally Wrong intoa film, with Shields and Powell striving mightily to play themselves and Franco in a supporting role, will be released later this year.

DAVID SHIELDSis the author of sixteen books, including Reality Hunger (named one of the best books of 2010 by more than thirty publications), The Thing About Life Is That One Day You ll Be Dead (New York Times bestseller), Black Planet (National Book Critics Circle Award finalist), and Remote (winner of the PEN/Revson Award). He has published essays and stories in numerous periodicals, including the New York Times Magazine, Harper s, Yale Review, Village Voice, Salon, Slate, McSweeney s, and Believer. His work has been translated into twenty languages. CALEB POWELL, who grew up in the Pacific Northwest, has played bass in a band, worked construction, and spent ten years teaching ESL and studying foreign languages on six continents. Now a stay-at-home father in Seattle, he has published stories and essays in descant, Post Road, and ZYZZYVA."