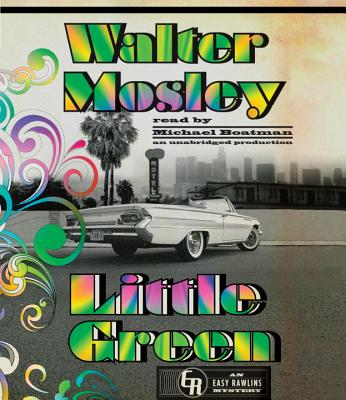 By Walter Mosley, Michael Boatman (Read by)
Not available to order

One of the greatest private eye heroes, Easy Rawlins,
walked the mean streets of the late ’60s this year. Read back to back,
you get a look at the period from different age, racial, and
coastal perspectives with a well defined hero in a
beatifully crafted mystery.

When Walter Mosley burst onto the literary scene in 1990 with his first Easy Rawlins mystery, "Devil in a Blue Dress" a combustible mixture of Raymond Chandler and Richard Wright he captured the attention of hundreds of thousands of readers (including future president Bill Clinton). Eleven books later, Easy Rawlins is one of the few private eyes in contemporary crime fiction who can be called iconic and immortal. In the incendiary and fast-paced "Little Green," he returns from the brink of death to investigate the dark side of L.A.'s 1960s hippie haven, the Sunset Strip.
We last saw Easy in 2007's "Blonde Faith," fighting for his life after his car plunges over a cliff. True to form, the tough WWII veteran survives, and soon his murderous sidekick Mouse has him back cruising the mean streets of L.A., in all their psychedelic 1967 glory, to look for a young black man, Evander Little Green Noon, who disappeared during an acid trip. Fueled by an elixir called Gator's Blood, brewed by the conjure woman Mama Jo, Easy experiences a physical, spiritual, and emotional resurrection, but peace and love soon give way to murder and mayhem. Written with Mosley's signature grit and panache, this engrossing and atmospheric mystery is not only a trip back in time, it is also a tough-minded exploration of good and evil, and of the power of guilt and redemption. Once again, Easy asserts his reign over the City of (Fallen) Angels.

WALTER MOSLEY is the author of more than forty-one books, most notably eleven Easy Rawlins mysteries, the first of which, "Devil in a Blue Dress," was made into an acclaimed film starring Denzel Washington. "Always Outnumbered" was an HBO film starring Laurence Fishburne, adapted from his first Socrates Fortlow novel. A native of Los Angeles and a graduate of Goddard College, he holds an MFA from CCNY and lives in Brooklyn, New York. He is the winner of numerous awards, including an O. Henry Award, a Grammy Award, and PEN America's Lifetime Achievement Award.

“In 2007’s Blonde Faith, set in 1967, Easy Rawlins drove drunkenly off a cliff in what his creator indicated was likely his last appearance. Now, after two months of sliding in and out of consciousness, Easy begins the long journey back to the living, in Mosley’s superb 12th mystery featuring his iconic sleuth…. If there were an Edgar for best comeback player, Easy Rawlins would be a shoo-in.”
—Publishers Weekly (starred)