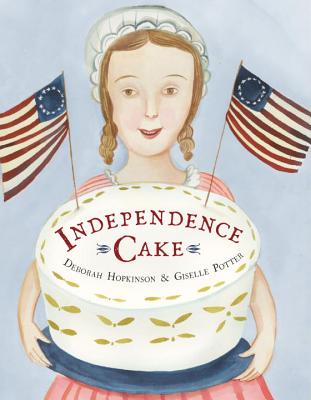 Celebrate American independence with this delightful picture book as you travel to Revolutionary America and meet the amazing Amelia Simmons: mother's helper, baker of delectable cakes, and soon-to-be authoress of the first American cookbook!

Master of the historical fiction picture book Deborah Hopkinson takes us back to late eighteenth-century America and the discombobulated home of Mrs. Bean, mother of six strapping sons, who simply can't manage—until Amelia Simmons arrives and puts things in order. And how well she cooks—everything from flapjacks to bread pudding to pickled cucumbers! She even invents new recipes using American ingredients like winter squash. Best of all, she can bake, and to honor the brand-new president, George Washington, she presents him with thirteen Independence Cakes—one for each colony. "Delicious!" he proclaims. Author's Note and original recipe included!

Praise for Abe Lincoln Crosses a Creek by Deborah Hopkinson:
“Abe Lincoln, a storyteller of great repute, would be hard-pressed to beat Hopkinson’s considerable skills.” —The Horn Book Magazine

Praise for This Is My Dollhouse by Giselle Potter:
"Celebrates the best of free play, capturing what it's like to be fully engaged and inspired." —The New York Times

Deborah Hopkinson is the prolific, bestselling, and versatile author of many books for children, including Beatrix Potter and the Unfortunate Tale of a Borrowed Guinea Pig, which Kirkus Reviews, in a starred review, called, "a charming, delightful homage." Hopkinson’s backlist picture-book gems include the ALA-ALSC Notable Children’s Book Abe Lincoln Crosses a Creek, Sweet Clara and the Freedom Quilt, and Fannie in the Kitchen, which is also about a cookbook writer and received four starred reviews. Deborah Hopkinson was awarded a Robert F. Sibert Honor for Titanic: Voices from the Disaster. Visit her at deborahhopkinson.com or on Twitter @deborahopkinson.

Giselle Potter is the author of This Is My Dollhouse, which the New York Times hailed as “celebrat[ing] the best of free play.” She has illustrated many books for children, among them Kate and the Beanstalk by Mary Pope Osborne, an ALA-ALSC Notable Children’s Book; The Boy Who Loved Words by Roni Schotter, a Parents' Choice Gold Award Winner; and Cecil the Pet Glacier by Matthea Harvey. She also wrote and illustrated Tell Me What to Dream About. Giselle lives in New York's Hudson Valley with her husband and two daughters. Visit her at GisellePotter.com.

"Both budding chefs and those who happily (and patriotically) consume their handiwork will eat this up." — Publishers Weekly, starred review