Provinces of Night: A Novel (Paperback) 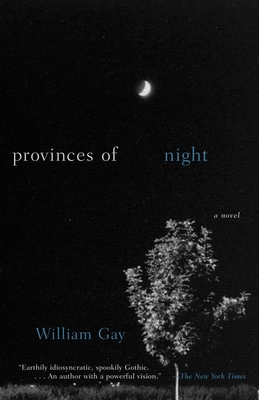 It’s 1952, and E.F. Bloodworth is finally coming home to Ackerman’s Field, Tennessee. Itinerant banjo picker and volatile vagrant, he’s been gone ever since he gunned down a deputy thirty years before. Two of his sons won’t be home to greet him: Warren lives a life of alcoholic philandering down in Alabama, and Boyd has gone to Detroit in vengeful pursuit of his wife and the peddler she ran off with. His third son, Brady, is still home, but he’s an addled soothsayer given to voodoo and bent on doing whatever it takes to keep E.F. from seeing the wife he abandoned. Only Fleming, E.F.’s grandson, is pleased with the old man’s homecoming, but Fleming’s life is soon to careen down an unpredictable path hewn by the beautiful Raven Lee Halfacre.

In the great Southern tradition of Faulkner, Styron, and Cormac McCarthy, William Gay wields a prose as evocative and lush as the haunted and humid world it depicts. Provinces of Night is a tale redolent of violence and redemption–a whiskey-scented, knife-scarred novel whose indelible finale is not an ending nearly so much as it is an apotheosis.

William Gay was the author of the novels The Long Home and Provinces of Night. His fiction appeared in Harper’s and Atlantic Monthly, among others, and he won the William Peden Award and the James Michener Memorial Prize. He passed away in 2012.

“Gay is unafraid to tackle the biggest of the big themes, nor does he shy away from the grand gesture that makes those themes manifest.”–The New York Times Book Review

“There is much to admire here: breathtaking, evocative writing and a dark, sardonic humor.”–USA Today