Confession of a Buddhist Atheist (Paperback) 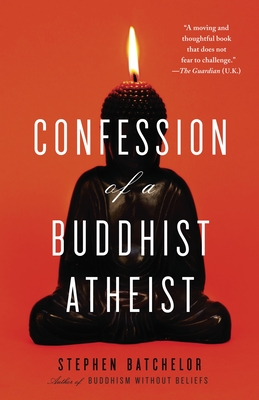 Does Buddhism require faith? Can an atheist or agnostic follow the Buddha’s teachings without believing in reincarnation or organized religion?

This is one man’s confession.

In his classic Buddhism Without Beliefs, Stephen Batchelor offered a profound, secular approach to the teachings of the Buddha that struck an emotional chord with Western readers. Now, with the same brilliance and boldness of thought, he paints a groundbreaking portrait of the historical Buddha—told from the author’s unique perspective as a former Buddhist monk and modern seeker. Drawing from the original Pali Canon, the seminal collection of Buddhist discourses compiled after the Buddha’s death by his followers, Batchelor shows us the Buddha as a flesh-and-blood man who looked at life in a radically new way. Batchelor also reveals the everyday challenges and doubts of his own devotional journey—from meeting the Dalai Lama in India, to training as a Zen monk in Korea, to finding his path as a lay teacher of Buddhism living in France. Both controversial and deeply personal, Stephen Batchelor’s refreshingly doctrine-free, life-informed account is essential reading for anyone interested in Buddhism.

Stephen Batchelor is a former monk in the Tibetan and Zen traditions and the author of books including Alone with Others, The Faith to Doubt, The Awakening of the West, Buddhism Without Beliefs, and Living with the Devil. He lives with his wife, Martine, in southwestern France and lectures and conducts meditation retreats throughout the world.

“A moving and thoughtful book that does not fear to challenge.”—The Guardian (U.K.)

“In this honest and serious book of self-examination and critical scrutiny, Stephen Batchelor adds the universe of Buddhism to the many fields in which received truth and blind faith are now giving way to ethical and scientific humanism, in which lies our only real hope.”—Christopher Hitchens