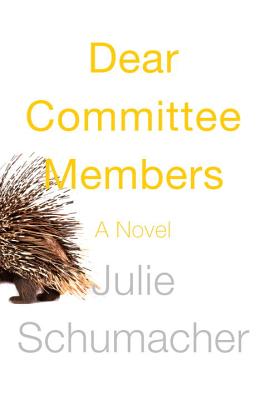 By Julie Schumacher
Not available to order

"A novel full of letters of recommendation? I did not really know what to expect from Julie Schumacher's Dear Committee Members, but I'm glad I picked it up. The writer of these letters, Jay Fitger, is a hopeless, self-righteous narcissist whose life is unraveling as he inadvertently ruins the lives of those who ask his help. Julie Schumacher is funny and this novel is cleverly crafted. She unveils bits of plot throughout each one and, thankfully, Fitger can't help himself but to fight against the boiler plate expected of him and continually shoot himself in the foot while shooting his students in more severe metaphorical limbs. You have to hand it to Jay Fitger, though. He writes a letter of recommendation letter to a catering company as passionately as he would write a letter to a grad program. While Dear Committee Members is funny, it reveals itself as a serious reflection on art and creation; its beauty, its futility, and its inevitability. Schumacher has a unique novel here and it is well worth picking it up. It is funny and enlightening and while a novel composed entirely of letters of recommendation may seem like a gimmick, it is not. It's varied and we learn much about the characters, even with as strict a point of view as unanswered letters."

“Told brilliantly through a beleaguered creative writing professor's letters of recommendation for students over the course of one school year, Dear Committee Members is a hilarious and surprisingly poignant pleasure to read. From postscripts directed to his ex-wife to rants about the lauded economics department at his university to sincere interest in an advisee's success, Jay Fitger's letters are blisteringly honest, if not always flattering. This book delightfully critiques the state of the humanities in American universities with erudite allusion and dry wit.”
— Mary-Catherine Breed, Brazos Bookstore, Houston, TX

Finally a novel that puts the "pissed" back into "epistolary."
Jason Fitger is a beleaguered professor of creative writing and literature at Payne University, a small and not very distinguished liberal arts college in the midwest. His department is facing draconian cuts and squalid quarters, while one floor above them the Economics Department is getting lavishly remodeled offices. His once-promising writing career is in the doldrums, as is his romantic life, in part as the result of his unwise use of his private affairs for his novels. His star (he thinks) student can't catch a break with his brilliant (he thinks) work"Accountant in a Bordello," based on Melville's"Bartleby." In short, his life is a tale of woe, and the vehicle this droll and inventive novel uses to tell that tale is a series of hilarious letters of recommendation that Fitger is endlessly called upon by his students and colleagues to produce, each one of which is a small masterpiece of high dudgeon, low spirits, and passive-aggressive strategies. We recommend"Dear Committee Members"to you in the strongest possible terms.

JULIE SCHUMACHER grew up in Wilmington, Delaware, and graduated from Oberlin College and Cornell University. Her first novel, "The Body Is Water," was published by Soho Press in 1995 and was an ALA Notable Book of the Year and a finalist for the PEN/Hemingway Award and the Minnesota Book Award. Her other books include a short story collection, "An Explanation for Chaos," and five books for younger readers. She lives in St. Paul and is a faculty member in the Creative Writing Program and the Department of English at the University of Minnesota. Visit her on the web atjulieschumacher.com."