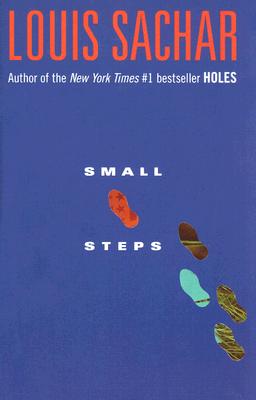 Two years after being released from Camp Green Lake, Armpit is home in Austin, Texas, trying to turn his life around. But it’s hard when you have a record, and everyone expects the worst from you. The only person who believes in him is Ginny, his 10-year old disabled neighbor. Together, they are learning to take small steps. And he seems to be on the right path, until X-Ray, a buddy from Camp Green Lake, comes up with a get-rich-quick scheme. This leads to a chance encounter with teen pop sensation, Kaira DeLeon, and suddenly his life spins out of control, with only one thing for certain. He’ll never be the same again.

In his first major novel since Holes, critically acclaimed novelist Louis Sachar uses his signature wit combined with a unique blend of adventure and deeply felt characters to explore issues of race, the nature of celebrity, the invisible connections that determine a person’s life, and what it takes to stay on course. Doing the right thing is never a wrong choice–but a small step in the right direction.

"Louis Sachar is magic to the toughest circle of critics: librarians, children’s booksellers, teachers – and, most of all, kids."
–USA Today

"Sachar’s touch is as deft as ever and the book is a page-turner."
–Detroit Free-Press

"Sachar has a talent for creating realistic relationships between unlikely friends. Although that's a staple device of children's literature, it often works by drawing on clichés. Sachar's characters, though, are never stereotypes, but always vividly alive."
–Los Angeles Times

"His prose is clear and relaxed, and funny in a low-key, observant way."
–New York Times

"Part of what makes Small Steps so believable and appealing is that its characters do have insecurities, and they aren’t ashamed to let them show."
–BookPage

"A smart jigsaw puzzle of a novel."
–The New York Times