The Song Machine: Inside the Hit Factory (Hardcover) 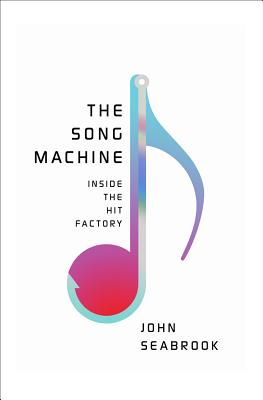 By John Seabrook
Out of Print

"From Ace of Base through Backstreet Boys to Rihanna and Katy Perry, THE SONG MACHINE chronicles the story of how a bunch of Swedish DJs and musicians conquered the American and world charts for 20 years. It's an utterly compelling and fascinating read that opens the door and shines a spotlight upon how hits are written and the anonymous people who write them."

Over the last two decades a new type of hit song has emerged, one that is almost inescapably catchy. Pop songs have always had a "hook," but today’s songs bristle with them: a hook every seven seconds is the rule. Painstakingly crafted to tweak the brain's delight in melody, rhythm, and repetition, these songs are highly processed products. Like snack-food engineers, modern songwriters have discovered the musical "bliss point." And just like junk food, the bliss point leaves you wanting more.

In The Song Machine, longtime New Yorker staff writer John Seabrook tells the story of the massive cultural upheaval that produced these new, super-strength hits. Seabrook takes us into a strange and surprising world, full of unexpected and vivid characters, as he traces the growth of this new approach to hit-making from its obscure origins in early 1990s Sweden to its dominance of today's Billboard charts.

Journeying from New York to Los Angeles, Stockholm to Korea, Seabrook visits specialized teams composing songs in digital labs with new "track-and-hook" techniques. The stories of artists like Katy Perry, Britney Spears, and Rihanna, as well as expert songsmiths like Max Martin, Stargate, Ester Dean, and Dr. Luke, The Song Machine shows what life is like in an industry that has been catastrophically disrupted—spurring innovation, competition, intense greed, and seductive new products.

Going beyond music to discuss money, business, marketing, and technology, The Song Machine explores what the new hits may be doing to our brains and listening habits, especially as services like Spotify and Apple Music use streaming data to gather music into new genres invented by algorithms based on listener behavior.

Fascinating, revelatory, and original, The Song Machine will change the way you listen to music.

John Seabrook has been a staff writer at The New Yorker since 1993. The author of several books including Nobrow, he has taught narrative nonfiction writing at Princeton University. He lives in Brooklyn, New York.

Through immersive anecdotes and witty observations, Seabrook explores questions of ownership and taste, and about the music business as a whole, as we learn it’s not just the ‘song machine’ that’s brilliant but also the people churning the gears.
— Isabella Biedenharn

Fascinating…. The Song Machine is lively, entertaining and often insightful, of interest both to pop mavens and to those who couldn’t imagine caring about the latest hits.

Fascinating…. Copy editors will rejoice at Seabrook’s well-written and deeply researched book. He is a staff writer for The New Yorker and his book fits into that magazine’s penchant for telling very detailed stories about things you might not notice about pop culture.

Seabrook spins a fascinating history, one that encompasses everything from the Brill Building and Phil Spector to Afrika Bambaataa to ‘American Idol.’ Running underneath the human stories like a bassline is the inexorable flow of technology.

An immersive, reflective, and utterly satisfying examination of the business of popular music.
— Nathaniel Rich

Eminently readable and important…. Seabrook's in-depth interviews with an army of songwriters, producers, performers and others make for series of profiles that document a revolution in the music business.