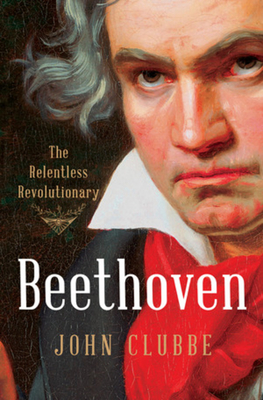 A fascinating and in-depth exploration of how the Enlightenment, the French Revolution, and Napoleon shaped Beethoven’s political ideals and inspired his groundbreaking compositions.

Beethoven imbibed Enlightenment and revolutionary ideas in his hometown of Bonn, where they were fervently discussed in cafés and at the university. Moving to Vienna at the age of twenty-one to study with Haydn, he gained renown as a brilliant pianist and innovative composer. In that conservative city, capital of the Hapsburg empire, authorities were ever watchful to curtail and punish overt displays of radical political views. Nevertheless, Beethoven avidly followed the meteoric rise of Napoleon.

As Napoleon had made strides to liberate Europe from aristocratic oppression, so Beethoven desired to liberate humankind through music. He went beyond the musical forms of Haydn and Mozart, notably in the Eroica Symphony and his opera Fidelio, both inspired by the French Revolution and Napoleon.

John Clubbe illuminates Beethoven as a lifelong revolutionary through his compositions, portraits, and writings, and by setting him alongside major cultural figures of the time—among them Schiller, Goethe, Byron, Chateaubriand, and Goya.

John Clubbe, who holds three degrees from Columbia University, taught chiefly at Duke and the University of Kentucky. He has written books on nineteenth-century cultural history and numerous essays, primarily on Byron, Beethoven, and Napoleon. In Santa Fe, New Mexico, where he now lives, he has given pre-concert lectures for the Santa Fe Pro Musica and the Santa Fe Symphony.

A thoughtful cultural history that takes into account the times in which Beethoven lived and worked—and they were times of revolution.
— Tim Page - Washington Post

This astute biography will appeal most to classical music fans, as well as those interested in the history of Enlightenment and revolutionary thinking in late 18th-century Europe.
— Publishers Weekly

Using historical, artistic, and literary sources in new ways, John Clubbe illuminates Beethoven’s political identity, particularly his attitude toward Napoleon. This vivid and passionate book will help anyone who cares about Beethoven’s music to understand the beliefs he had to hide from the Austrian authorities.
— Peter Pesic, author of Polyphonic Minds, and director of the Science Institute and musician-in-residence at St. John’s College in Santa Fe, New Mexico

In astonishing detail and breadth, Clubbe has—after a lifetime of study devoted to Beethoven and Napoleon—created a political biography of the composer that is unique and compelling. It has the potential to reshape our image of Beethoven as it reframes his works within the context of the revolutions and revolutionary figures the composer knew from his earliest days in Bonn. While focusing on the composer’s fascination with Napoleon, Clubbe vividly brings the entire era to life, weaving reformers, revolutionary ideals and literature, censorship and repression, and the ultimate failure of the grand revolutionary experiments into one rich fabric.
— Dr. William Meredith, emeritus director of the Beethoven Center, San Jose State University