Dry Bones in the Valley: A Novel (The Henry Farrell Series #1) (Hardcover) 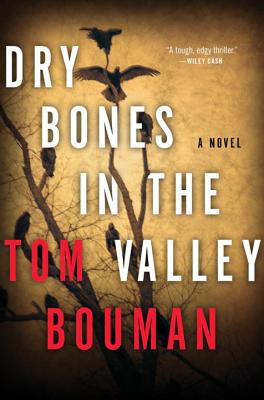 This is book number 1 in the The Henry Farrell Series series.

“Dry Bones in the Valley is a beautifully crafted debut thriller with a powerful sense of place and unforgettable characters. Wild Thyme Township in rural Pennsylvania is where Henry Farrell retreated after his wife died, and he now serves as the town's lone policeman. The area's rural isolation is perfect cover for those who choose to live outside the law, and the discovery of a young man's body on the land of an elderly eccentric is the start of a complex chain of events that twist and turn like the hilly Pennsylvania roads where they occur. I look forward to reading more by Tom Bouman!”
— Carol Schneck Varner, Schuler Books & Music, Okemos, MI

When an elderly recluse discovers a corpse on his land, Officer Henry Farrell follows the investigation to strange places in the countryside, and into the depths of his own frayed soul.

In Wild Thyme, Pennsylvania, secrets and feuds go back generations. The lone policeman in a small township on the sparse northern border, Henry Farrell expected to spend his mornings hunting and fishing, his evenings playing old-time music. Instead, he has watched the steady encroachment of gas drilling bring new wealth and erode neighborly trust. The drug trade is pushing heroin into the territory. There are outlaws cooking meth in the woods, guys Henry grew up with. When a stranger turns up dead, Henry’s search for the killer will open old wounds, dredge up ancient crimes, and exact a deadly price.


With vivid characters and flawless pacing, Tom Bouman immerses readers in rural northeastern Pennsylvania, a region in the grip of change. In these derelict woods full of whitetail deer and history, the hunt is on.

Tom Bouman is the author of The Bramble and the Rose, Fateful Mornings and Dry Bones in the Valley, which won the Edgar Award for Best First Novel and a Los Angeles Times Book Prize. He lives in upstate New York.

A tough, edgy thriller that asks hard questions about the destruction of our environment, our local communities, and our families. Readers of smart literary thrillers are going to love this novel. I wish like hell that my name were on the cover.
— Wiley Cash, New York Times best-selling author of A Land More Kind Than Home

Raymond Chandler said that Hammett took murder away from the manor houses and gave it back to the people who actually commit it. Tom Bouman continues that tradition. Bouman's story is deceptively simple, layered with history, bearing the promise of lightness, of redemption.
— James Sallis, author of Drive

Tom Bouman is a remarkable new voice in contemporary fiction. Dry Bones in the Valley is a tightly crafted piece of rural noir that seems pulled from the earth itself, a profound look at the dark corners of rural America. Readers of Daniel Woodrell and Donald Ray Pollock will find much to love.

It's a mystery, yes, but it's also a love story between a man and the land and people he knows like the back of his hand. Dry Bones in the Valley is a gorgeous, lived-in novel, and Bouman's turns of phrase are chest-clutching in their beauty.

— Hannah Pittard, author of The Fates Will Find Their Way

So smooth it's as if it was written on spring water. Shadowy, swift, impossible to put down. I was enraptured. Any justice and this writer will soon be a major star.
— Joe R. Lansdale, author of Deadman’s Road

Officer Henry Farrell is a shy man, but in his own ways just as ornery and tough as the cast of rugged characters who inhabit his Pennsylvania woods, where the mysteries are as old as love and grief. A rural cop with a keen intelligence and a wounded heart, Henry’s the right man to unearth the secrets of Dry Bones in the Valley. Tom Bouman’s debut novel is one you won’t want to miss.

[An] outstanding debut… Henry’s growth from a grief-stricken widower to a lawman with an inner resolve fuels the brisk plot, as does an evocative look at a changing landscape.
— Publishers Weekly, Starred review

Bouman’s debut shows rural noir at its finest: a poetically written mystery about a man struggling with his inner demons and an area of great natural beauty few had heard of before the natural gas boom.
— Kirkus Reviews, Starred Review

Grit-lit meets wry suspense, along with a keen rendering of place and politics.
— New York Magazine (Six Books to Read this Summer)

Some stories are so sad, you want them to have the comfort of a gentle storytelling voice. Tom Bouman extends this kindness in… his beautifully written first novel.
— Marilyn Stasio - New York Times Book Review

An exciting and disturbing debut… Bouman brings his world to life with texture that gives every room and vehicle and person a history and character, keeping us immersed in this mesmerizing and often terrifying story.
— Michael Sims - Washington Post