Superfandom: How Our Obsessions are Changing What We Buy and Who We Are (Hardcover) 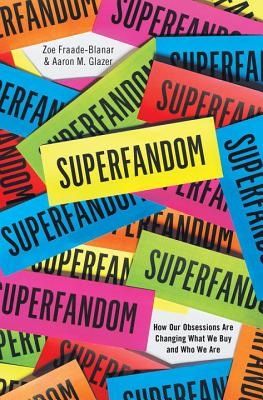 An in-depth look at the influence of fans—society’s alpha consumers—on our lives and culture.

As fandom sheds its longtime stigmas of geekiness and hysteria, fans are demanding more from the celebrities and brands they love. Digital tools have given organizations—from traditional businesses to tech startups—direct, real-time access to their most devoted consumers, and it’s easy to forget that this access flows both ways. This is the new “fandom-based economy”: a convergence of brand owner and brand consumer. Fan pressures hold more clout than ever before as audiences demand a say in shaping the future of the things they love.

In Superfandom, Zoe Fraade-Blanar and Aaron M. Glazer explain this new era of symbiosis. For producers, it can mean a golden opportunity: brands such as Polaroid and Surge, preserved by the passion of a handful of nostalgic fans, can now count on an articulate, creative, and, above all, loyal audience. Yet, the new economy has its own risks—it’s also easier than ever for companies to lose their audience’s trust, as Valve did when it tried to introduce a paid mod system for its Skyrim video game.

Examining key cases that span a wide range of consumer markets, Fraade-Blanar and Glazer explain why some kinds of engagement with fans succeed and some backfire. Throughout, the authors probe fandom’s history, sociology, and psychology. From the nineteenth-century American Alice Drake, who bribed her way into the houses of her favorite European composers, to Hatsune Miku, the Japanese virtual celebrity whose songs are composed entirely by fans, the dynamics of fandom—the activities we perform to show we belong to a group of people with common interests—may be as old as culture itself.

For groupies of financier Warren Buffet and enthusiasts of Cards Against Humanity alike, the consumer relationship has been transformed. Superfandom is an essential guide for those who care about, contribute to, and live in our rapidly expanding fan-driven economy.

Zoe Fraade-Blanar is a faculty member of New York University’s Interactive Telecommunications Program (ITP) and NYU Journalism. She is a cofounder and the CCO of the crowdsourced toy company Squishable.

Aaron M. Glazer is a cofounder and the CEO of Squishable. Previously, he worked as a consultant and journalist.

Fans aren’t just customers—they care more about what your company does, both good and bad—and no one understands how fans tick and what they can mean for a business better than Zoe and Aaron.
— Clay Shirky, author of Here Comes Everybody: The Power of Organizing Without Organizations

In a 1986 sketch on Saturday Night Live, William Shatner told a gathering of Trekkers at a Holiday Inn in Rye, New York, to “get a life . . . for crying out loud.” A lot has happened since then. Tremendous technological transformations and online opportunities have created a complex calculus regarding the relationship between texts and brands and the people who love them. Superfandom provocatively explores this evolving relationship—with a dazzling number of examples—and describes what happens when fans don’t just consume something but influence it as well. And it’s not just a celebration of the new voices now being heard in the process of the production of culture; it also describes how superfans can, on occasion, be real pains-in-the-neck.

— Robert Thompson, professor at the Newhouse School of Public Communication and director of the Bleier Center for Television and Popular Culture at Syracuse University

Superfandom is the ultimate guide to making the most of the new fan-based economy. It presents the new way businesses interact with their customers, and it’s funny, too. Read it for insights into epic failure and brilliant success in fan management, or read it for stories about the politics of Disney’s social clubs. Either way, you won’t regret it. Your fandom will be better off for it.

— Jonah Berger, professor at Wharton School of the University of Pennsylvania and best-selling author of Contagious: Why Things Catch On

An insightful and entertaining look at the culture of
fandom, from its early days right up to the present . . . . Well-reasoned and
engagingly written.
— Booklist

Recommended for companies who seek to create a successful brand, as well as readers interested in the nature of fan culture.
— Library Journal