Intelligence and How to Get It: Why Schools and Cultures Count (Paperback) 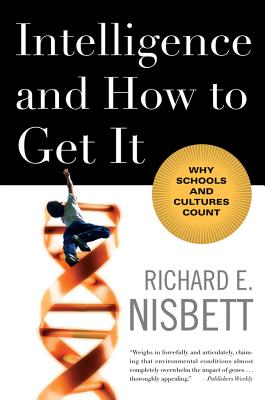 Who are smarter, Asians or Westerners? Are there genetic explanations for group differences in test scores? From the damning research of The Bell Curve to the more recent controversy surrounding geneticist James Watson’s statements, one factor has been consistently left out of the equation: culture. In the tradition of Stephen Jay Gould’s The Mismeasure of Man, world-class social psychologist Richard E. Nisbett takes on the idea of intelligence as biologically determined and impervious to culture with vast implications for the role of education as it relates to social and economic development. Intelligence and How to Get It asserts that intellect is not primarily genetic but is principally determined by societal influences.

Richard E. Nisbett is Theodore M. Newcomb Distinguished University Professor of Psychology at the University of Michigan and Research Professor at Michigan’s Institute for Social Research. He has taught courses in social psychology, cultural psychology, cognitive psychology, and evolutionary psychology. His research focuses on how people from different cultures think, perceive, feel, and act in different ways. He is the recipient of the Distinguished Scientific Contribution Award of the American Psychological Association and the William James Fellow Award of the American Psychological Society and is a member of the National Academy of Sciences and the American Academy of Arts and Sciences.

Nisbett argues that a variety of social, cultural, and economic factors can significantly affect a child’s IQ, and suggests ways to improve intelligence scores, as well as grades, by manipulating those factors.

A hugely important analysis of the determinants of IQ. . . . A ‘must-read.’
— Daniel Osherson, professor of psychology, Princeton University