The Lifespan of a Fact (Paperback) 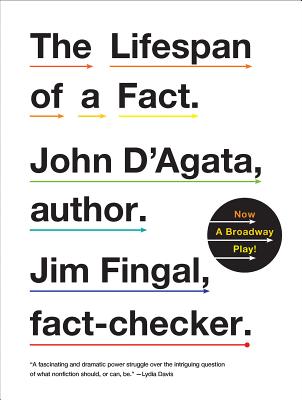 An innovative essayist and his fact-checker do battle about the use of truth and the definition of nonfiction.

How negotiable is a fact? In 2003, after publishing his book of experimental essays, Halls of Fame, John D’Agata was approached by Harper’s magazine to write an essay for them, one that was eventually rejected due to disagreements related to its fact checking. That essay which eventually became the foundation of D’Agata’s critically acclaimed About a Mountain was accepted by another magazine, the Believer, but not before they handed it to their own fact-checker, Jim Fingal. What resulted from that assignment, and beyond the essay’s eventual publication in the magazine, was seven years of arguments, negotiations, and revisions as D’Agata and Fingal struggled to navigate the boundaries of literary nonfiction.

This book includes an early draft of D’Agata’s essay, along with D’Agata and Fingal’s extensive discussion around the text. What emerges is a brilliant and eye-opening meditation on the relationship between “truth” and “accuracy” and a penetrating conversation about whether it is appropriate for a writer to substitute one for the other.

John D’Agata is the author of About a Mountain, Halls of Fame, and editor of The Next American Essay and The Lost Origins of the Essay. He teaches creative writing at the University of Iowa in Iowa City, where he lives.

Jim Fingal is now a software engineer and writer in Cambridge, Massachusetts.

More than anything, The Lifespan of a Fact pushes readers to consider not just the possibilities of art, but also its boundaries. It’s as concerned with what we can get away with as whether we should.

A singularly important meditation on fact and fiction, the imagination and life, fidelity and freedom. Provocative, maddening, and compulsively readable, The Lifespan of a Fact pulses through a forest of detail to illuminate high-stakes, age-old questions about art and ethics—questions to which the book (blessedly!) provides no easy answers.

Thus begins the alternately absorbing and infuriating exercise that is The Lifespan of a Fact, a Talmudically arranged account of the conflict between Jim Fingal, zealous checker, and John D’Agata, nonfiction fabulist.

Genius…In The Lifespan of a Fact, D’Agata and Fingal turn everything around on us until even our most basic assumptions are left unclear…A vivid and reflective meditation on the nature of nonfiction as literary art.

The Lifespan of a Fact might be the most improbably entertaining book ever published.

The Lifespan of a Fact is remarkable not only as an intellectual adventure, but for its portrayal of the search for these kinds of truths as a conversation. It is a high-stakes exercise not of surety but of anxiety…open to the production of wonder, but equally to that of doubt, frustration, and betrayal.

A fascinating and dramatic power struggle over the intriguing question of what nonfiction should, or can, be.
— Lydia Davis