The Black Banners (Declassified): How Torture Derailed the War on Terror after 9/11 (Paperback) 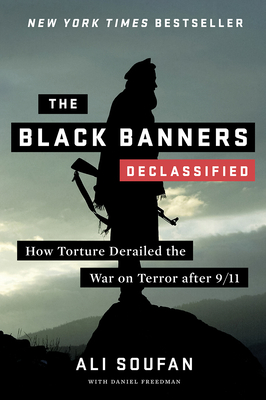 The definitive account of an FBI special agent’s al-Qaeda story, unredacted for the first time.

Widely heralded on publication as a "must-read" (Military Review) and "important window on America’s battle with al-Qaeda" (Washington Post), Ali Soufan’s revelatory account of the war on terror as seen from its front lines changed the way we understand al-Qaeda and how the United States prosecuted the war—and led to hard questions being asked of our leaders.

When The Black Banners was published in 2011, significant portions of the text were redacted. After subsequent review by the Central Intelligence Agency, those redactions have been lifted. Their removal corrects the record on how vital intelligence was obtained from al-Qaeda suspects and brings forth important new details on the controversial use of enhanced interrogation techniques (torture) to extract information from terror suspects. For many years, proponents of the use of these techniques have argued that they produced actionable intelligence in the war on terror. This edition of The Black Banners explodes this myth; it shows Soufan at work using guile and intelligent questioning—not force or violence—to extract some of the most important confessions in the war, and it vividly recounts the failures of the government’s torture program. Drawing on Soufan’s experiences as a lead operative for the FBI and declassified government records, The Black Banners (Declassified) documents the intelligence failures that lead to the tragic attacks on New York and Washington, DC, and subsequently how torture derailed the fight against al-Qaeda. With this edition, eighteen years on from the first sanctioned enhanced interrogation technique, the public can finally read the complete story of what happened in their name after the events of 9/11.

The Black Banners (Declassified) includes a new foreword from Ali Soufan that addresses the significance of the CIA’s decision to lift the redactions.

Ali Soufan, a former FBI special agent and the lead investigator on some of the world’s?most complex international terrorism cases, gained an?international reputation as a top counterterrorism operative. He is the chairman and CEO of The Soufan Group, founder of The Soufan Center, and has been featured in books, films, television series, newspaper articles, and documentaries across the globe.

Unfortunately, we only have one Ali Soufan. Had American intelligence listened to him, 9/11 might never have happened. No one did more to unravel the story of al-Qaeda than Ali Soufan. Thankfully, he’s left another legacy in this book. Anyone who wants to know what really happened should read it. It’s an inspiring but wrenching story told from the heart of a great American.
— Lawrence Wright, author of The Looming Tower: Al-Qaeda and the Road to 9/11

Paints a devastating picture of rivalry and dysfunction inside the government’s counterterrorism agencies…The account offered by the agent, Ali H. Soufan is the most detailed to date by an insider.
— Scott Shane - New York Times

One of the most valuable and detailed accounts of its subject to appear in the past decade.
— Economist

Soufan knows exactly what he is talking about, and does us all a service by having it set down in The Black Banners.

Superb. An education. And the best book on al-Qaeda out there, bar none.
— Robert Baer