Famous Writers I Have Known: A Novel (Paperback) 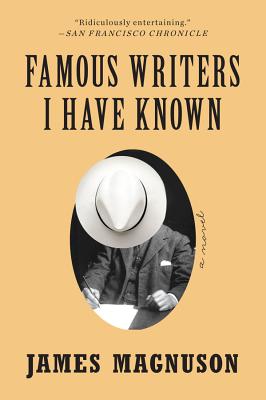 By James Magnuson
$15.95
Backordered. Place an order and we will let you know when to expect your book.

In this brilliant mix of literary satire and crime caper, Frankie Abandonato, a small-time con man on the run, finds refuge by posing as V. S. Mohle—a famously reclusive writer—and teaching in a prestigious writing program somewhere in Texas. Streetwise and semiliterate, Frankie finds that being treated as a genius agrees with him.

The program has been funded by Rex Schoeninger, the world’s richest novelist, who is dying. Buzzards are circling, angling for the remains of Rex’s fortune, and Frankie quickly realizes that he has been presented with the opportunity of a lifetime. Complicating matters is the fact that Rex is haunted by a twenty-five-year feud with the shadowy Mohle. What rankles Rex is that, while he has written fifty bestsellers and never gotten an ounce of literary respect, Mohle wrote one slender novel, disappeared into the woods, and become an icon. Determined to come to terms with his past, Rex has arranged to bring his rival to Texas, only to find himself facing off against an imposter.

Famous Writers I Have Known is not just an unforgettable literary romp but also a surprisingly tender take on two men—one a scam artist frantic to be believed, the other an old lion desperate to be remembered.

James Magnuson is the author of nine novels and the recipient of multiple fellowships and awards for fiction. He is the former director of the James A. Michener Center for Writers at the University of Texas and lives in Austin.

Tantalizing…Magnuson nimbly keeps the wheel spinning, neither condemning the whole enterprise of creative writing programs, literary awards and the ambition that drives them, nor fully embracing them. He seems content to simply observe, reflect and entertain.
— Edward Nawotka - Dallas Morning News

James Magnuson’s mischievous comedy of novelists and conmen—professional liars both—is as subtle as it is subversive, as clever as it is courageous, as witty as it is touching. Readers will love it—but writers beware!
— Jim Crace, author of Being Dead