To the Promised Land: Martin Luther King and the Fight for Economic Justice (Hardcover) 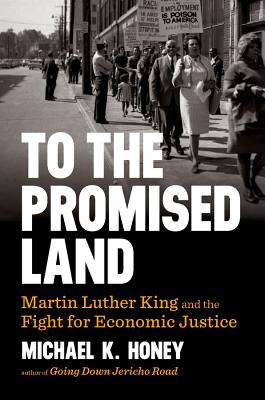 By Michael K. Honey
Unavailable. Orders will be auto-cancelled.

“To the Promised Land helps us to remember King as a prophet for poor and working-class people, as we carry on that campaign against racism and poverty in our own times. A terrific book.” —Timothy B. Tyson, author of The Blood of Emmett Till

Fifty years ago, a single bullet robbed us of one of the world’s most eloquent voices for human rights and justice. To the Promised Land goes beyond the iconic view of Martin Luther King Jr. as an advocate of racial harmony to explore his profound commitment to the poor and working class and his call for "nonviolent resistance" to all forms of oppression, including the economic injustice that "takes necessities from the masses to give luxuries to the classes."

Phase one of King’s agenda led to the Civil Rights and Voting Rights acts. But King also questioned what good it does a person to "eat at an integrated lunch counter if he doesn’t earn enough money to buy a hamburger and a cup of coffee?" In phase two of his activism, King organized poor people and demonstrated for union rights while seeking a "moral revolution" to replace the self-seeking individualism of the rich with an overriding concern for the common good. “Either we go up together or we go down together,” King cautioned, a message just as urgent in America today as then. To the Promised Land challenges us to think about what it would mean to truly fulfill King’s legacy and move toward his vision of "the promised land" in our own time.

Michael K. Honey, a former Southern civil rights and civil liberties organizer, is Haley Professor of Humanities at the University of Washington Tacoma, where he teaches labor, ethnic, and gender studies and American history. He is a Guggenheim Fellow and has won numerous research fellowships and book awards for his books on labor, race relations, and civil rights history, including the Robert F. Kennedy Book Award for Going Down Jericho Road. He lives in Tacoma with his wife, Pat Krueger.

No scholar is more qualified than Michael Honey to illuminate the historical roots of the 1968 Poor Peoples Campaign. To the Promised Land is a remarkable achievement -- a work of serious scholarship that is also eminently readable.

Dr. Martin Luther King Jr. was a revolutionary, fighting to end social injustice and economic inequality, and a catalyst for the ongoing rebellions of the poor. Michael Honey tells a compelling story of militant, revolutionary love in action. This is a dangerous book.
— Robin D. G. Kelley, author of Freedom Dreams: The Black Radical Imagination

To the Promised Land helps us to remember King as a prophet for poor and working-class people, as we carry on that campaign against racism and poverty in our own times. A terrific book.

— Timothy B. Tyson, author of The Blood of Emmett Till

A portrait of King that is more accurate, more troubling, and more needed than ever before.
— William P. Jones, author of The March on Washington

Public memory has played tricks on King’s legacy, turning his fierce struggle against systemic racism into a quest for colorblindness. Honey restores the man in full, one who perceived desegregation as a first step on a longer path toward full citizenship and economic justice. To the Promised Land gives us a longer, messier, and unfinished civil rights movement and a truer portrait of King’s radical hopes. It is an inspiration for the work ahead.

Michael Honey’s important and timely new book recovers the fullness of King’s social Christian vision. More than just Jim Crow’s most formidable detractor, he was one of capitalism’s most insistent and incisive critics. Honey leaves no doubt that, in our new Gilded Age, King’s dream, marked by a longing for both racial and economic justice, remains as relevant as ever.
— Heath W. Carter, author of Union Made: Working People and the Rise of Social Christianity in Chicago

This exemplary book stands out for the way
scholar and former activist Honey shows class and race as dual focuses of King’s efforts. . . . An important contribution to our understanding
of King and his legacy.
— Booklist

[A] concise but richly detailed work about King’s
attempts to bring about economic justice for all Americans. . . . [This] book contains
both insight and inspiration to activists of many stripes.
— Publishers Weekly

A worthy look at a seldom-documented portion of [King's] agenda.
— Kirkus Reviews