The Lost Café Schindler: One Family, Two Wars, and the Search for Truth (Hardcover) 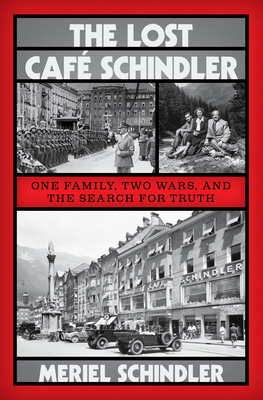 An extraordinary memoir of a Jewish family spanning two world wars and its flight from Nazi-occupied Austria.

Meriel Schindler spent her adult life trying to keep her father, Kurt, at bay. But when he died in 2017, he left behind piles of Nazi-era documents related to her family’s fate in Innsbruck, Austria, and a treasure trove of family albums reaching back to before World War I. Meriel was forced to confront not only their fractured relationship, but also the truth behind their family history.

The Lost Café Schindler re-creates the journey of an extraordinary family, whose relatives included the Jewish doctor who treated Hitler’s mother when she was dying of breast cancer; the Kafka family; and Alma Schindler, the wife of Gustav Mahler. The narrative centers around the Café Schindler, the social hub of Innsbruck. Famous for its pastries, home-distilled liquors, live entertainment, and hospitality, the restaurant attracted Austrians from all walks of life. But as conditions became untenable for Jews in Austria during the Nazi era, the Schindlers were forced to leave, and their café was expropriated.

Meriel reconstructs the color and vibrancy of life in prewar Innsbruck against the majestic backdrop of the Austrian Alps, as well as the creeping menace and, finally, terror of the Nazi occupation. Ultimately, The Lost Café Schindler is a story of tragic loss—several relatives disappeared in Terezín and Auschwitz—but also one of reclamation and reconciliation. Beautifully written, it is an unforgettable portrait of an era and a testament to the pull of family history on future generations.

Meriel Schindler is an employment lawyer, partner, and head of a team at the law firm Withers LLP, and is a trustee of the writing charity Arvon. She lives in London with her husband, Jeremy, and has three adult children.

Affecting.... Ms. Schindler’s insight-filled reckoning with the past can’t help but leave behind a bitter taste that no amount of Sacher torte can disguise.
— Diane Cole - Wall Street Journal

An extraordinary and compelling book of reckonings—a journey across a long, complex, and deeply painful arc of history, grippingly told—a wonderful melding of the personal and the political, the family and the historical.
— Philippe Sands, author of East West Street and The Ratline

Meriel Schindler takes us on a journey that spans 150 years and threads across countries and continents as she uncovers her family’s history. Weaving her relatives’ personal lives into the turbulent frame of European history, Schindler moves back and forth between the public and the private realms. Lovingly written and astutely observed, The Lost Café Schindler is a meditation on loss: personal loss and loss of historic significance.

This almost unbearably touching book traces an extraordinarily diligent and sensitive process of family rediscovery. Meriel Schindler shows us how short the window of opportunity for Central European Jews was and how lasting an imprint they nonetheless left behind.
— Peter Hayes, author of Why? Explaining the Holocaust

Meriel Schindler’s research is prodigious, her writing compelling, and her discoveries large and small reunite her with her far-flung family and with the community that exploited them, impoverished them, persecuted them, and even murdered some of them. Through the history of one family, the entire history of the Holocaust and the struggle to rebuild after the Holocaust unfolds.…I was moved to take this journey with her.
— Michael Berenbaum, professor of Jewish studies and director of the Sigi Ziering Institute: Exploring the Ethical and Religious Implications of the Holocaust, American Jewish University, Los Angeles

An extraordinary story—so cadenced and so moving.
— Edmund de Waal, author of The Hare with Amber Eyes

The Lost Café Schindler seamlessly melds two riveting histories, the tumultuous story of Jewish life in the Austro-Hungarian Empire and the gripping tale of a remarkable family. Meriel Schindler’s account is a powerful personal journey of discovery. This extremely well-researched and beautifully written story is one that will linger long after the last page.

Powerful....
Beyond the compelling personal details, the author chillingly documents how the
livelihoods of Austrian Jews were destroyed, ‘systematically stripped of their
assets, at bargain-basement prices’.... Throughout, Schindler writes vividly
about representation, memory, and the aftermath of atrocity. A significant
addition to the literature on the Holocaust.
— Kirkus, starred review

Rigorously researched, The Lost Café Schindler successfully weaves together a compelling and at times deeply moving memoir and family history that also chronicles the wider story of the Jews of the Austro-Hungarian Empire.…It distinguishes itself through its combination of mystery and reconciliation.

The most fascinating—and devastating—family history.… not just a genealogical exploration.… it sets out the wider experiences of the Jewish population of the Austro-Hungarian empire, weaving in the story of how antisemitism took root.… The stories could scarcely be more powerful.
— The Sunday Times (UK)