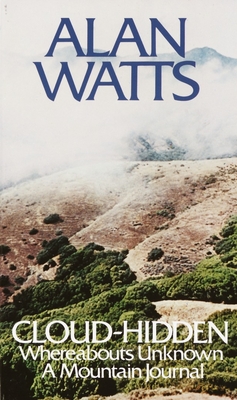 Over the course of nineteen essays, Alan Watts ("a spiritual polymatch, the first and possibly greatest" —Deepak Chopra) ruminates on the philosophy of nature, ecology, aesthetics, religion, and metaphysics.

Assembled in the form of a “mountain journal,” written during a retreat in the foothills of Mount Tamalpais, CA, Cloud-Hidden, Whereabouts Unknown is Watts’s meditation on the art of feeling out and following the watercourse way of nature, known in Chinese as the Tao. Embracing a form of contemplative meditation that allows us to stop analyzing our experiences and start living in to them, the book explores themes such as the natural world, established religion, race relations, karma and reincarnation, astrology and tantric yoga, the nature of ecstasy, and much more.

Alan W. Watts, who held both a master’s degree in theology and a doctorate of divinity, is best remembered as an interpreter of Zen Buddhism in particular, and of Indian and Chinese philosophy in general. Standing apart, however, from sectarian membership, he has earned the reputation of being one of the most original and “unrutted” philosophers of the twentieth century. Watts was the author of some twenty books on the philosophy and psychology of religion that have been published in many languages throughout the world, including the bestselling The Way of Zen. An avid lecturer, Watts appeared regularly on the radio and hosted the popular television series, Eastern Wisdom and Modern Life,in the 1960s. He died in 1973.