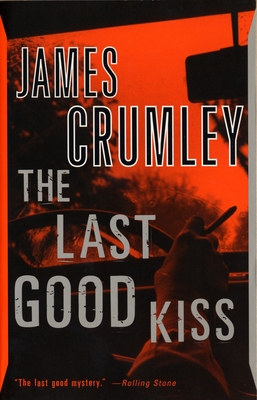 This is book number 1 in the C.W. Sughrue series.

What Sam Pekinpah and Hunter S Thompson did with their medium in the Seventies, so did James Crumley with the PI novel. His masterpiece introduced his Montana detective CW Suhgrue, looked at the modern west, post Vietnam and Watergate America, and delivered one of the most quoted opening lines in crime fiction.

One of the most influential crime novels ever written, by a legend of the genre.

Tough, hard-boiled, and brilliantly suspenseful, The Last Good Kiss is an unforgettable detective story starring C. W. Sughrue, a Montana investigator who kills time by working at a topless bar. Hired to track down a derelict author, he ends up on the trail of a girl missing in Haight-Ashbury for a decade. The tense hunt becomes obsessive as Sughrue takes a haunting journey through the underbelly of America's sleaziest nightmares.

James Crumley was born in Three Rivers, Texas, and spent most of his childhood in South Texas. After serving three years in the U.S. Army and completing college degrees in history (BA, Texas College of Arts and Industries) and creative writing (MFA, University of Iowa), he joined the English faculty at the University of Montana at Missoula. He was also a visiting professor at a number of other institutions around the country, including the University of Texas at El Paso, Colorado State University, Reed College, and Carnegie-Mellon. His works include a novel of Vietnam, One to Count Cadence, and seven detective novels: The Wrong Case, The Last Good Kiss, Dancing Bear, The Mexican Tree Duck, Bordersnakes, The Final Country, and The Right Madness. He died in Missoula in 2008.

"What Raymond chandler did for the Los Angeles of the Thirties, James Crumley does for the roadside West of today." —Harper's