Against All Enemies (Hardcover) 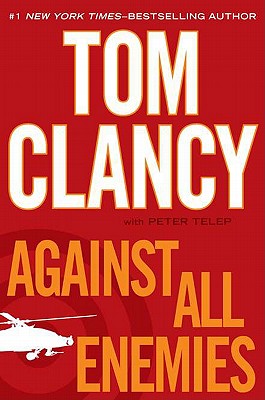 The master of international intrigue and explosive action introduces a new hero for a new era of warfare . . . against a new kind of threat.
Get ready to meet ex-Navy SEAL Max Moore.
A terrorist bombing in Pakistan wipes out Max Moore's entire CIA team. As the only survivor, the former Navy SEAL plunges deeper into the treacherous tribal lands to find the terrorist cell, but what he discovers there leads him to a much darker conspiracy in an unexpected part of the globe the US/Mexico border.
Here a drug war rages between the Juarez and Sinaloa cartels. The landscape is strewn with bodies, innocents and drug dealers alike, but is there an even deadlier enemy lurking in background? Into this deadly brew, Moore leads a group of specially selected agents whose daring actions reveal shocking answers and uncover an unholy plan a strike against the very heart of America.

Tom Clancy was the author of eighteen #1New York Times-bestselling novels. His first effort, The Hunt for Red October, sold briskly as a result of rave reviews, then catapulted onto the bestseller list after President Ronald Reagan pronounced it "the perfect yarn." Clancy was the undisputed master at blending exceptional realism and authenticity, intricate plotting, and razor-sharp suspense. He died in October 2013."