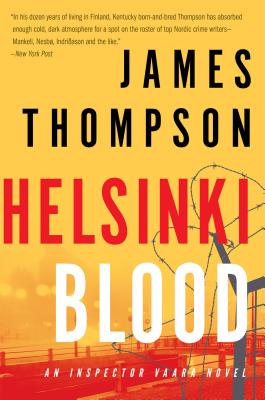 This is book number 4 in the Inspector Vaara Novels series.

The exceptional fourth thriller in the Edgar-nominated series featuring Inspector Kari Vaara.
"A missing woman too unimportant to raise alarms... criminal masterminds too powerful to pursue. And when the system fails, Inspector Kari Vaara must dispense his own brand of justice."
Kari Vaara is recovering from the physical and emotional toll of solving the Lisbet Soderlund case when he's approached with a plea: an Estonian woman begs him to find her daughter, Loviise, a young woman with Down syndrome who was promised work and a better life in Finland... and has since disappeared.
One more missing girl is a drop in the barrel for a police department that is understaffed and overburdened, but for Kari, the case is personal: it's a chance for redemption, to help the victims his failed black-ops unit was intended to save, and to prove to his estranged wife, Kate, that he's still the man he once was. His search will lead him from the glittering world of Helsinki's high-class clubs to the darkest circles of Finland's underground trade in trafficked women... and straight into the path of Loviise's captors, who may be some of the most untouchable people in the country.
As Kari works his new case, a past one comes back to haunt him when powerful enemies return to settle unfinished business. In a dangerous game of cat-and-mouse, he is propelled toward a reckoning in which the stakes are life or death... and only the victors will be left standing.

James Thompson, eastern Kentucky born and raised, has lived in Finland for more than a dozen years. His first novel, "Snow Angels," was nominated for the Edgar, the Anthony, and The Strand Magazine Critics Award.

“Finnish noir is the current tone of Thompson’s series . . . readers who are already invested in this character ache to see him succeed. Just the fact that Thompson can make the situation believable and make us care is evidence of his talent.”—Library Journal

“Helsinki Blood is as dark and bracing as a Nordic winter . . . Kari Vaara blasts other maverick cops out of the (icy) water.”—M. J. McGrath, author of White Heat and The Boy in the Snow

“I can’t get enough of this author. No one writes noir better, Nordic or otherwise.”—Leighton Gage, author of Blood of the Wicked

“Inspector Kari Vaara’s latest nightmare barrels along at a breakneck pace as he faces enemies on his doorstep as well as his own demons within. James Thompson’s spare, no-frills action is straight to the point. Helsinki Blood as raw as it gets, it doesn’t pause for breath and it and takes no prisoners.”—Quentin Bates, author of Frozen Assets and Cold Comfort

"Compelling...Thompson draws on his long residence in Finland to convincingly portray a grungy northern underworld."—Publishers Weekly

“In his dozen years of living in Finland, Kentucky born and-bred Thompson has absorbed enough cold, dark atmosphere for a spot on the roster of top Nordic crime writers—Mankell, Nesbø, Indriðason and the like.”—New York Post

“A must-read for fans of Stieg Larsson and Henning Mankell.” —Booklist (starred review)