A Man Without Breath (Hardcover) 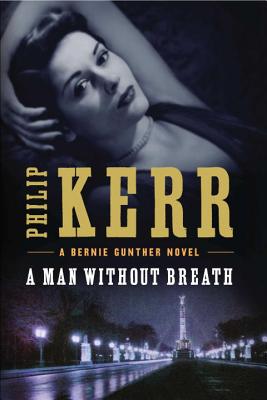 By Philip Kerr
Email or call for price
Hard to Find

Berlin detective Bernie Gunther is sent to Poland to find evidence to
pin on the Russians for war crimes, but instead finds a murder that
leads to the highest ranks in Germany. A great historical mystery that
delves into the darker aspects of social morality. (Visit mysterypeople.wordpress.com for more of Scott's recommendations.)

From the national bestselling author of "Prague Fatale," a powerful new thriller that returns Bernie Gunther, our sardonic Berlin cop, to the Eastern Front.
Berlin, March, 1943. A month has passed since the stunning defeat at Stalingrad. Though Hitler insists Germany is winning the war, commanders on the ground know better. Morale is low, discipline at risk. Now word has reached Berlin of a Red massacre of Polish officers in the Katyn Forest near Smolensk. If true, the message it would send to the troops is clear: Fight on or risk certain death. For once, both the Wehrmacht and Propaganda Minister Goebbels want the same thing: irrefutable evidence of this Russian atrocity. To the Wehrmacht, such proof will soften the reality of its own war crimes in the eyes of the victors. For Goebbels, such proof could turn the tide of war by destroying the Alliance, cutting Russia off from its western supply lines.
Both parties agree that the ensuing investigation must be overseen by a professional trained in sifting evidence and interrogating witnesses. Anything that smells of incompetence or tampering will defeat their purposes. And so Bernie Gunther is dispatched to Smolensk, where truth is as much a victim of war as those poor dead Polish officers.
Smolensk, March, 1943. Army Group Center is an enclave of Prussian aristocrats who have owned the Wehrmacht almost as long as they ve owned their baronial estates, an officer class whose families have been intermarrying for generations. The wisecracking, rough-edged Gunther is not a good fit. He is, after all, a Berlin bull. But he has a far bigger concern than sharp elbows and supercilious stares, for somewhere in this mix is a cunning and savage killer who has left a trail of bloody victims.
This is no psycho case. This is a man with motive enough to kill and skills enough to leave no trace of himself. Bad luck that in this war zone, such skills are two-a-penny. Somehow Bernie must put a face to this killer before he puts an end to Bernie.

PHILIP KERR is the author of eight previous Bernie Gunther novels. Bestselling Field Gray was nominated for the 2012 Edgar Award for Best Novel. Kerr is also the much-loved author of the fantasy series Children of the Lamp. He lives in London.

Praise for A Man Without Breath

“This is the most intelligent brand of crime fiction, and there is moral complexity here in spades.”—The Daily Beast

“A Man Without Breath is a masterful accomplishment that delivers a gripping mystery wrapped around meticulously researched history…It brings the deadly past to life.”—The Arizona Republic

“Kerr just keeps raising the ante with this series. And this is the best book yet.”—Dayton Daily News

“One of these days World War II will come to an end, and then how will we manage without Bernie Gunther, the cynical Berlin cop who has somehow contrived to stay alive and retain some vestige of personal integrity in Philip Kerr’s harrowing historical thrillers?”—The New York Times Book Review

“This ninth Bernie Gunther tale (after Prague Fatale) focuses on two months of 1943, mixing real-life characters with fictional ones. Kerr’s historical knowledge and writing skills merge these elements seamlessly in a gripping story of murder, but it is Bernie who holds it all together even as he questions the absurdity of attempting normalcy during war. Mystery, historical fiction, and military history buffs will join existing Bernie fans in welcoming this latest installment in the series.”—Library Journal

“Kerr’s sketch of Goebbels dazzles. The author pulls the reader down into the dark underground of Der Führer’s rabbit hole of totalitarian horror . . . [A Man Without Breath] masterfully explores morality's shadowy gray edge.”—Kirkus