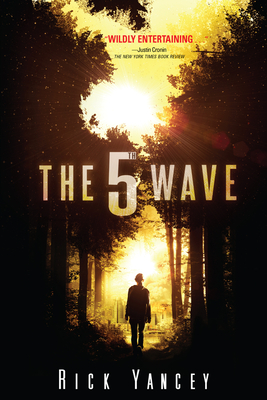 This is book number 1 in the The 5th Wave series.

"The 5th Wave is
one of the best teen sci-fi thrillers I've read so far. It's one of
those reads where you can literally say "this could be our future." It's
very realistic, scary, and definitely reads like a movie script. I was
thoroughly impressed and I can't imagine how the rest of the series will
turn out. Read. This."

Now, it's the dawn of the 5th wave, and on a lonely stretch of highway, Cassie runs from Them. The beings who only look human, who roam the countryside killing anyone they see. Who have scattered Earth's last survivors. To stay alone is to stay alive, Cassie believes, until she meets Evan Walker. Beguiling and mysterious, Evan Walker may be Cassie's only hope for rescuing her brother--or even saving herself. But Cassie must choose: between trust and despair, between defiance and surrender, between life and death. To give up or to get up.

"A modern sci-fi masterpiece . . . should do for aliens what Twilight did for vampires."—USAToday.com

Rick Yancey (www.rickyancey.com) is the author of the New York Times bestseller The 5th Wave, The Infinite Sea, several adult novels, and the memoir Confessions of a Tax Collector. His first young-adult novel, The Extraordinary Adventures of Alfred Kropp, was a finalist for the Carnegie Medal. In 2010, his novel, The Monstrumologist, received a Michael L. Printz Honor, and the sequel, The Curse of the Wendigo, was a finalist for the Los Angeles Times Book Prize. When he isn't writing or thinking about writing or traveling the country talking about writing, Rick is hanging out with his family.

“It has the dark, swoopy adrenaline of The Hunger Games, but the elegiac tone of The Road. Who cares what shelf you find it on? Just read it.”
—EW.com

"A modern sci-fi masterpiece... should do for aliens what Twilight did for vampires."
—USAToday.com

*"Yancey's heartfelt, violent, paranoid epic, filled with big heroics and bigger surprises, is part War of the Worlds, part Starship Troopers, part Invasion of the Body Snatchers, and part The Stand . . . a sure thing for reviewers and readers alike."
—Booklist *starred review*

"This is DAMN and WOW territory.  Quite simply, one of the best books I've read in years."
—Melissa Marr, New York Times bestselling author

"Prepare to set everything else aside when you launch into this one. The break-neck pace and high stakes will draw you in, but it's the characters who will keep you turning pages. It's been a long time since I've read a story this compelling."
—Cinda Williams Chima, New York Times bestselling author

Other awards for Rick Yancey: