The Infinite Sea: The Second Book of the 5th Wave (Hardcover) 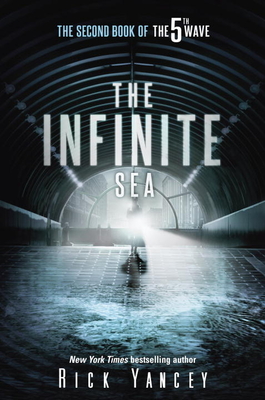 This is book number 2 in the The 5th Wave series.

"I was really wondering how he would top The Fifth Wave. That book was so good! Yancey exceeded my expectations. The Infinite Sea is action-packed. It has a great storyline and I love how we get additional character points of view. It's a lot of fun to get to know their backgrounds and perspectives. I can't wait for the movie! It's going to be so good!"

The riveting follow-up to the New York Times bestselling The 5th Wave, hailed by Justin Cronin as “wildly entertaining.”

How do you rid the Earth of seven billion humans? Rid the humans of their humanity.

Surviving the first four waves was nearly impossible. Now Cassie Sullivan finds herself in a new world, a world in which the fundamental trust that binds us together is gone. As the 5th Wave rolls across the landscape, Cassie, Ben, and Ringer are forced to confront the Others’ ultimate goal: the extermination of the human race.

Cassie and her friends haven’t seen the depths to which the Others will sink, nor have the Others seen the heights to which humanity will rise, in the ultimate battle between life and death, hope and despair, love and hate.


Praise for The 5th Wave

“Everyone I trust is telling me to read this book.”—The Atlantic Wire

Rick Yancey (www.rickyancey.com) is the author of the New York Times bestseller The 5th Wave, The Infinite Sea, several adult novels, and the memoir Confessions of a Tax Collector. His first young-adult novel, The Extraordinary Adventures of Alfred Kropp, was a finalist for the Carnegie Medal. In 2010, his novel, The Monstrumologist, received a Michael L. Printz Honor, and the sequel, The Curse of the Wendigo, was a finalist for the Los Angeles Times Book Prize. When he isn't writing or thinking about writing or traveling the country talking about writing, Rick is hanging out with his family.

Praise for The Infinite Sea

“Impressively improves on the excellent beginning of the trilogy.”—USA Today

“An epic sci-fi novel with all the romance, action, and suspense you could ever want.”—Seventeen.com

*“This gut-wrenching sequel to The 5th Wave careens on a violent course of nonstop action.”—Publishers Weekly, starred review

“A roller-coaster ride of a sequel.”—Kirkus Reviews

“It doesn’t just move the story forward, but even opens up new possibilities in the previous book.” —Geekdad.com