Out of the Blues (A Detective Sarah Alt Novel #1) (Hardcover) 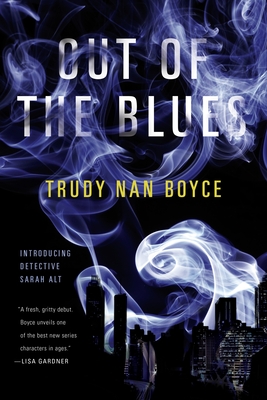 This is book number 1 in the A Detective Sarah Alt Novel series.

From an author with more than thirty years’ experience in the Atlanta Police Department comes a riveting procedural debut introducing an unforgettable heroine.

On her first day as a newly minted homicide detective, Sarah “Salt” Alt is given the cold-case murder of a blues musician whose death was originally ruled an accidental drug overdose. Now new evidence has come to light that he may have been given a hot dose intentionally. And this evidence comes from a convicted felon hoping to trade his knowledge for shortened prison time . . . a man who Salt herself put behind bars.

In a search that will take her into the depths of Atlanta’s buried wounds—among the city’s homeless, its politically powerful churches, commerce and industry, and the police department itself—Salt probes her way toward the truth in a case that has more at stake than she ever could have imagined. At once a vivid procedural and a penetrating examination of what it means to be cop, Out of the Blues is a remarkable crime debut.

Trudy Nan Boyce received her Ph.D. in community counseling before becoming a police officer for the City of Atlanta. During her more-than-thirty-year career she served as a beat cop, homicide detective, senior hostage negotiator, and lieutenant. Boyce retired from the police department in 2008 and still lives in Atlanta.  She was awarded both a Georgia Author of the Year Award and a Pinckley Prize for her debut, Out of the Blues.

Praise for Out of the Blues

“What's this? A female cop who doesn't look like a runway model and doesn't go mano a mano with psychotic killers?  Trudy Nan Boyce may be a first-time author, but she was in law enforcement for more than 30 years, which should explain why the stationhouse personnel and forensic details in Out of the Blues feel so authentic.”—Marilyn Stasio, The New York Times Book Review

“Out of the Blues introduces an appealing character, Detective Sarah Alt [“Salt”] . . . Atlanta locales and history are a recurring element in the narrative and a pleasant feature of the book [and] Boyce describes these places with colorful clarity. . . Salt’s next sleuthing adventure should be much anticipated.”—Associated Press

“Boyce was a beat cop, homicide detective, hostage negotiator and lieutenant in Atlanta before retiring in 2008. She knows policing. She writes with intensity and flair and wit. This combination has resulted in an irresistible procedural with a winning protagonist. And the bonus, the lagniappe, is the seductive way Boyce writes about music, particularly the blues.”—Shelf Awareness

“A fresh, gritty debut. Boyce unveils one of the best new series characters in ages, an Atlanta detective with a haunting past but complete dedication to working the streets.  A book that combines fast-paced suspense with moving insights.”—#1 New York Times-bestselling author Lisa Gardner

"Boyce has a season’s veteran’s way of creative irresistible characters . . . Out of the Blues is filled with authentic details about police work.”—Atlanta Journal-Constitution

“Less whodunit than odyssey, as Salt—clearly bent . . . on fixing the world one sociopath at a time—navigates anti-woman prejudice in her unit, anti-cop sentiment in her hometown, and the steaming corruption that reaches from Atlanta's lower depths to its very top.”—Kirkus Reviews

"Salt’s character combines quick intelligence and a refreshing, confident humanity that wins allies from all walks of life, and Boyce’s fluid southern voice is an alluring contrast to the stark realities she skillfully evokes.”—Booklist

“Out of the Blues takes the reader for an exciting ride through old Atlanta with brand new homicide detective, Sarah Alt, aka “Salt” as our guide.  Salt is brave and imaginative, salty and sweet, and her creator—former Atlanta homicide detective, Trudy Nan Boyce—uses her impressive descriptive power to make our ride colorful, gothic, and irresistibly Southern.”—#1 New York Times-bestselling author Joseph Wambaugh

“There’s a new star in crime fiction . . . Boyce explores the dark underbelly of Atlanta in her excellent procedural. . . . [A] stunning debut.”—RT Book Reviews

“Out of the Blues is a stunning debut.  Trudy Boyce’s background in law enforcement is on vivid display, and she writes with passion, heart, and a powerful no-holds-barred voice you won’t soon forget.”—Linda Castillo, New York Times-bestselling author of After the Storm

“Grit, heart, smarts, and authenticity—Detective Sarah Alt has them, and so does Out of the Blues. A terrific mystery by talented newcomer Trudy Nan Boyce.” —Meg Gardiner, Edgar Award–winning author of Phantom Instinct

“As a former cop on the seedier and more dangerous streets of Atlanta, Trudy Nan Boyce has probably seen it all, and she shares it with us in this compelling debut novel. Salt is both gutsy and contemplative, and when her ‘cold’ case heats up, she’s ready for the challenge.” —Margaret Maron, award-winning author of Designated Daughters