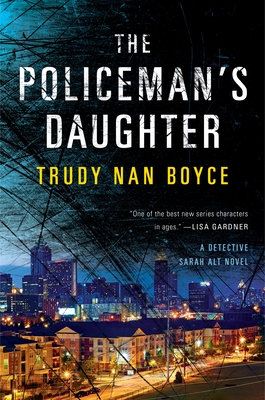 This is book number 3 in the A Detective Sarah Alt Novel series.

From author Trudy Nan Boyce, whose police procedural debut was hailed as "authentic" (NYTBR) and "exceptional" (Milwaukee Journal-Sentinel), returns with a stunning prequel to the Detective Salt series, the story behind the case that earned Salt her promotion to homicide.

At the beginning of her career, Sarah "Salt" Alt was a beat cop in Atlanta's poorest, most violent housing project, The Homes. It is here that she meets the cast of misfits and criminals that will have a profound impact on her later cases: Man Man, the leader of the local gang on his way to better places; street dealer Lil D and his family; and Sister Connelly, old and observant, the matriarch of the neighborhood. A lone patrolwoman, Salt's closest lifeline is her friend and colleague Pepper, on his own beat nearby. And when a murder in The Homes brings detectives to the scene, Salt draws closer to Detective Wills, initiating a romance complicated by their positions on the force.

When Salt is shot and sustains a head injury during a routine traffic stop, the resulting visions begin leading her toward answers in the case that makes her career. This is the tale of a woman who solves crimes through a combination of keen observation, grunt work, and pure gut instinct; this is the making of Detective Salt.

Trudy Nan Boyce received her Ph.D. in community counseling before becoming a police officer for the city of Atlanta. During her more-than-thirty-year career she served as a beat cop, a homicide detective, a senior hostage negotiator, and a lieutenant. Boyce retired from the police department in 2008 and still lives in Atlanta.

Praise for The Policeman’s Daughter

“Captivating . . . In the rough neighborhood that Ms. Boyce—a retired Atlanta police officer—depicts with heartbroken affection, a loving partner may also be violent, and “youth” is rarely a synonym for “innocence.” . . . “You have to be mighty careful how you unravel a mystery,” a wise neighborhood woman warns Salt. “You go pulling one thing and we all feel a tug. We’re all bound together.” And bound up right with them is Salt, who worries over all these citizens as if they were her own family, because the oath she swore to protect and defend was a sacred one.”—The Wall Street Journal

“Got my attention right away . . . [Salt is] our favorite street cop.”—Marilyn Stasio, The New York Times Book Review

“Former Atlanta police officer Boyce vividly captures the toll that working such a beat takes as she fleshes out Salt, with her imperfections, humanity, and strong moral sense. A worthy addition to a gritty, compelling series.”—Booklist

“Captivating . . . Introduces a cast of multidimensional characters that bring the gritty neighborhood to life. . . . This taut, authentic depiction of life as a female beat cop will resonate with crime fiction fans.”—Publishers Weekly

Praise for the Sarah Alt Novels

“Old Bones is an engaging police procedural with authentic characters, voice and action; it is also a rich literary work delving into racism and law enforcement relationships with the public. Boyce's history in the Atlanta Police Department provides an astute perspective that makes this novel so much more than a bad-guys-versus-good-guys showdown. She reaches deep into the heart of her subject and acknowledges, ‘The incidents had their roots in slavery, Jim Crow, and the legacies of poverty and systemic racism.’ Dark, haunting and disturbingly reflective of the world Boyce lives in, Old Bones is astounding.”—Shelf Awareness (starred review)

“What’s this? A female cop who doesn't look like a runway model and doesn't go mano a mano with psychotic killers?  Trudy Nan Boyce may be a first-time author, but she was in law enforcement for more than 30 years, which should explain why the stationhouse personnel and forensic details in Out of the Blues feel so authentic.”—Marilyn Stasio, The New York Times Book Review