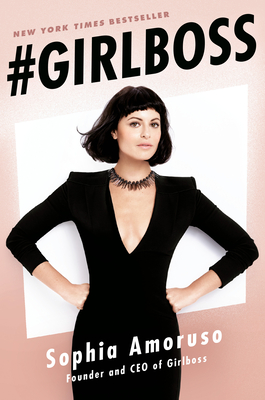 In the New York Times bestseller that the Washington Post called “Lean In for misfits,” Sophia Amoruso shares how she went from dumpster diving to founding one of the fastest-growing retailers in the world.

Amoruso spent her teens hitchhiking, committing petty theft, and scrounging in dumpsters for leftover bagels. By age twenty-two she had dropped out of school, and was broke, directionless, and checking IDs in the lobby of an art school—a job she’d taken for the health insurance. It was in that lobby that Sophia decided to start selling vintage clothes on eBay.

Flash forward to today, and she’s the founder of Nasty Gal and the founder and CEO of Girlboss. Sophia was never a typical CEO, or a typical anything, and she’s written #GIRLBOSS for other girls like her: outsiders (and insiders) seeking a unique path to success, even when that path is windy as all hell and lined with naysayers.

#GIRLBOSS proves that being successful isn’t about where you went to college or how popular you were in high school. It’s about trusting your instincts and following your gut; knowing which rules to follow and which to break; when to button up and when to let your freak flag fly.

“A witty and cleverly told account . . . It’s this kind of honest advice, plus the humorous ups and downs of her rise in online retail, that make the book so appealing.” —Los Angeles Times

“Amoruso teaches the innovative and entrepreneurial among us to play to our strengths, learn from our mistakes, and know when to break a few of the traditional rules.” —Vanity Fair

Sophia Amoruso is the founder and CEO of Girlboss Media, which connects women to explore success on their own terms through content, community, and experiences. Her 2014 New York Times bestseller #GIRLBOSS, which chronicled her early life as well as her experience as the CEO and founder of fashion empire Nasty Gal, was adapted into a scripted TV series that premiered on Netflix in 2017. Sophia is also the author of Nasty Galaxy and the forthcoming Girlboss Workbook, out on October 24, 2017.

“#GIRLBOSS is more than a book and Sophia Amoruso is more than a purveyor of (fine and fly) garments. #GIRLBOSS is a movement—a philosophy for making your work life as fun, fresh and raunchy as your personal adventures. Sophia encourages us to own the qualities we've previously been ashamed of (bossiness, crudeness, petty thievery) in order to become the masters of our own destiny, financially independent and radically ourselves. I'm so in.”
—Lena Dunham

“[An] appealing business memoir . . . Amoruso’s authenticity comes through here and is, no doubt, one of the many reasons for her remarkable success.”
—Publishers Weekly

“Get motivated by Sophia Amoruso’s story . . . Her honest advice is useful for women in any industry.”
—People StyleWatch

“among the glut of leadership books featuring paunchy old men in power suits, at least #Girlboss has a shot at standing out . . . it’s clear why young women admire her . . . #Girlboss is targeting the same readers as Sheryl Sandberg’s updated Lean In for Graduates . . . So buy #Girlboss for your daughter…”
—Bloomberg Businessweek

“It’s easy to get the sense, reading Lean In, that Sandberg is writing for women who’ve already made it. #GIRLBOSS is for those who haven’t, which means it is aimed at people who have nothing to lose, which makes it a much riskier and more enjoyable manifesto.”
–New York Magazine / The Cut

“she addresses the highs and lows of her journey with an honesty that's refreshing in a management memoir . . . Amoruso's swagger in #Girlboss is contagious. The book is a decent model for all the girls -- nay, people -- who don't want to climb the traditional career ladder. Her path, though unconventional, might even inspire a couple of readers to try to heed her lessons and follow in her footsteps. But if there's one real takeaway from reading Amoruso, is that a pre-packaged rulebook for business success no longer exists.”
—Fortune

“And while we love a feel-good story, we're even more inspired by Amoruso's drive and success . . . The easy-breezy blend of anecdotal tales and entrepreneurial advice makes for a fast, easy read . . . with lots of brash but actionable takeaways . . . Bottom line? That's some serious #GirlPower. Buy the book today, thank us the second you're done reading.”
—SELF.com

“Young women could do worse than learn from her no-bullshit style and tireless work ethic.”
—Flavorwire

“Sophia Amoruso, founder and C.E.O. of Nasty Gal, shares her irreverent and invaluable lessons in what can easily be described as a power manifesto for strong, ambitious young women . . . #GIRLBOSS leads readers to water but doesn’t force them to drink; rather than present a get-rich-quick manual or a list of business tips, Amoruso teaches the innovative and entrepreneurial among us to play to our strengths, learn from our mistakes, and know when to break a few of the traditional rules.”
—VanityFair.com

“The book is full of so many great insights even though she insists it isn’t a how-to guide. You should absolutely read the entire book, but I think Amoruso should be commended for her management tips. They are what make her a #GIRLBOSS.”
–Levo League

“#GIRLBOSS is a must have for any young female entrepreneurs.”
—The Turn Magazine

“Amoruso’s voice is accessible and charmingly self-deprecating without losing the effortless cool that characterizes her clothes . . . Amoruso’s scrappy capitalist narrative makes an admirable attempt to prove that navigating the system isn’t the same as endorsing it. Being anti-­establishment is the old cool. The new cool is playing by your own rules and still winning by their standards.”
—New York Times Sunday Book Review

“[GIRLBOSS] is part memoir, part management guide and part girl-power manifesto. A sort of a Lean In for misfits, it offers young women a candid guide to starting a business and going after what they want.”
—Washington Post

“If you read one book with a hashtag for a title this year, make it #GIRLBOSS”
—TechCrunch

“[Sophia Amoruso is] a real-deal, born disruptor. In less than 10 years, she's turned that very same eBay vintage shop into a bona fide, $100 million global brand, through pure sweat; social-media savvy; and an eye for the fashion-forward, subversively sexy clothing women want to wear. And, yeah, great customer service. Now, sitting atop a mini-retail empire of over 350 employees, Sophia has become that rarest of things: a CEO who truly inspires and a patron saint of badass #girlbosses everywhere. Ahead, her thoroughly inspiring take on the unlikely rise of her scrappy brand, and why she'll always be an upstart at heart.”
–Refinery29

“Sophia Amoruso spares no detail in #GIRLBOSS, the story of how she went from dumpster diving teen to founder and CEO of $100 million online retailer Nasty Gal.”
–HarpersBazaar.com

“[Sophia Amoruso] takes the wisdom of CEOs before her (including Sandberg) and wraps it up with her biography, personal philosophy, and practical advice (e.g., don’t slander former employees on social media), all delivered with the same voice and attitude that has made her site so successful.”
–New York Magazine / The Cut

“Sophia sprinkles to-the-point wisdom into the story of her life so far (she’s not afraid of a little tough love), and this book is a must read for women of all ages.  Who doesn’t love inspiration with a little kick in the butt?”
–Real Simple / Lifestylers

“Everything Sophia touches has an air of cool, including her new book, #GIRLBOSS, which recounts the story of her first sale and her rise to retail stardom . . . The writing is witty and affable, like listening to a good friend tell you a story. And the advice runs the gamut, from writing a good cover letter, to owning your own style, to getting fired gracefully. #GIRLBOSS is an essential read for everyone who has realized that the path to happiness isn’t always a straight line.”
–The Standard / Culture Blog

“While Amoruso's backstory is one we're pretty much all well-versed in by now (we mean, what else are Google deep-dives for?), it's still one that we just can't seem to get enough of.”
—The Coveteur

“With a new book #GIRLBOSS sweeping bookshelves everywhere, we're not the only ones taking notice . . . Amoruso muses on the sheer marketing power of #GIRLBOSS—as a book, as a movement—while highlighting the history of her company.”
–LuckyMag.com

“a witty and cleverly told account . . . It's this kind of honest advice, plus the humorous ups and downs of her rise in online retail, that make the book so appealing . . . Amoruso's unconventional approach to business and her experiences as a rebellious teen and creative outcast would also appeal to anyone's entrepreneurial side.”
–Los Angeles Times