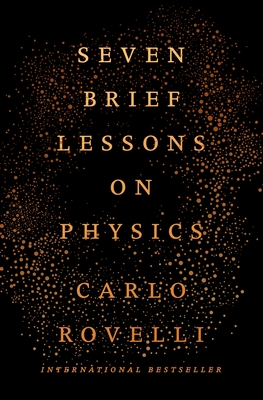 "This short book is a detailed look at the most recent and important issues in modern physics and it is written in a very accessible and readable format. The ease with which Rovelli has conveyed these complex ideas is absorbing - this is high level stuff that is not dumbed-down at all; it is rather explained in simple words that eschew the jargon usually associated with science. A perfect gift for someone wanting to know more about the world and universe around them."

“With a deft sensibility associated more often with poetry than theoretical physics, Seven Brief Lessons on Physics not only makes understandable the transcendent physical discoveries of the past century, but also reveals their powerful relevance to the human spirit. A revelatory and concise account of quantum mechanics, relativity, and the delight in both finding answers and seeking new questions, this jewel of a book lyrically demystifies the extraordinary realities of the cosmos.”
— Robin J. Dunn (W), St. John's College Bookstore, Annapolis, MD

The New York Times bestseller from the author of The Order of Time and Reality Is Not What It Seems, Helgoland, and Anaximander

“One of the year’s most entrancing books about science.”—The Wall Street Journal

This playful, entertaining, and mind-bending introduction to modern physics briskly explains Einstein's general relativity, quantum mechanics, elementary particles, gravity, black holes, the complex architecture of the universe, and the role humans play in this weird and wonderful world. Carlo Rovelli, a renowned theoretical physicist, is a delightfully poetic and philosophical scientific guide. He takes us to the frontiers of our knowledge: to the most minute reaches of the fabric of space, back to the origins of the cosmos, and into the workings of our minds. The book celebrates the joy of discovery.  “Here, on the edge of what we know, in contact with the ocean of the unknown, shines the mystery and the beauty of the world,” Rovelli writes. “And it’s breathtaking.”

Carlo Rovelli is a theoretical physicist who has made significant contributions to the physics of space and time. He has worked in Italy and the United States and currently directs the quantum gravity research group of the Centre de Physique Théorique in Marseille, France. His books, including Seven Brief Lessons on Physics, The Order of Time, and Helgoland, are international bestsellers that have been translated into more than fifty languages.

“In clear, elegant prose, Rovelli guides the reader through a whirlwind tour of some of the biggest ideas in physics. His passion for his chosen field is evident on every page… One can easily imagine perusing these essays while comfortably ensconced in an overstuffed chair by the fire, a snifter of cognac in hand… The reader will come away…with a deeper understanding of how modern physics has brought us closer to an ultimate understanding of reality.”—The New York Times Book Review

“A startling and illustrative distillation of centuries of science.”—The Economist

“The man who makes physics sexy . . . the scientist they’re calling the next Stephen Hawking.” —The Times Magazine

“The essays in Seven Brief Lessons on Physics arrive like shots of espresso, which you can consume the way the Italians do, quickly and while standing up. As slim as a volume of poetry, Mr. Rovelli’s book also has that tantalizing quality that good books of poems have; it artfully hints at meanings beyond its immediate scope... [H]is book is a roll call of the scientists who have taken us so far, from Einstein and Niels Bohr through Werner Heisenberg and Stephen Hawking... The lessons in Mr. Rovelli’s book, as elegiac as they are incisive, do them justice.”—The New York Times

“Delightful. . . . The metaphors are vivid, the visions dramatic.”—Nature

“A very slim volume that contains multitudes... Italian theoretical physicist and writer Carlo Rovelli uses a conversational tone to untangle the most complicated yet most beautiful advances in science in modern history... You'll feel a whole lot smarter for having read this elegant, straightforward little book.”—Esquire, The Best Books of 2016 (So Far)

“The writing is elegant and poetic, and Carlo's explanatory clarity is compelling. He organized this short book into seven lessons that introduce the non-specialized reader to the most fascinating questions about the universe, including how we learn about it.”—NPR

“Rovelli has a rare knack for conveying the top line of scientific theories in clear and compelling terms without succumbing to the lure of elaborate footnotes... a breath of fresh air.”—The Guardian

“Brief but eloquent... The slim volume is stereotypically the province of poetry, but this beautifully designed little book shows that science, with its curiosity, its intense engagement with what there really is, its readiness to jettison received ways of seeing, is a kind of poetry too”—Financial Times

“[Carlo Rovelli’s] concise and comprehensible writing makes sense of intricate notions such as general relativity, quantum mechanics, cosmology and thermodynamics. Rovelli's enthusiastic and poetic descriptions communicate the essence of these topics without getting bogged down in details.”—Scientific American

“[A] quick, engaging read…fun and insightful…you wouldn’t go wrong taking [it] to the beach this summer.”—Forbes

“Fascinating on every level.”—Daily Herald

“This beautiful little volume playfully introduces its readers to several basic principles of physics in an easy-to-grasp style that will surprise and delight you.”—San Francisco Chronicle

“Few writers have dared to compress the knowledge of a century’s worth of physics into less than 80 pages. Even fewer have succeeded with a touch of Carlo Rovelli’s clarity and verve…A sweeping presentation of the great ideas and discoveries of 20th century physics, aimed at readers with no scientific background whatsoever. It’s a joy to read.”—Gizmodo

“A slim poetic meditation... Rovelli belongs to a great Italian tradition of one-culture science writing that encompasses the Roman poet Lucretius, Galileo, Primo Levi and Italo Calvino. The physics here is comprehensible and limpid, and Rovelli gives it an edge through his clear-eyed humanistic interpretations.”—The Independent

“Written to be accessible and to appeal to the imagination of the liberal arts major…Rovelli highlights the beauty of theories of gravity, time, and consciousness.”—The Curious Wavefunction

“Rovelli's offering is a marvelous feast which should ignite a renewed sense of inspiration regarding the reach and beauty of science even in hardened veterans.”—The Millions

“In a world where the public is interested in science, Rovelli is a great ambassador whose passion can be found in Seven Brief Lessons on Physics.”—International Business Times

"It was eye-opening for me and truly changed how I will go forward in reading and learning about science."—Amy Poehler's Smart Girls

“For the curious reader ready to plunge into theoretical physics, Seven Brief Lessons on Physics by Carlo Rovelli is a short accessible introduction. The chapters are manageable chunks of famous theories, most recognizable even to those of us who don’t happen to have a Ph.D... Mr. Rovelli shows how scientists can not only accept [contradictions between theories] but also revel in its infuriating layers.”—Pittsburgh Post-Gazette

“Ultimately, Rovelli portrays the universe as a strange place where space-time, the present, the past and the future are illusions, and his unfolding of the mystery and the beauty of the universe is breathtaking.”—Raleigh News & Observer

“An intriguing meditation on the nature of the universe and our attempts to understand it that should appeal to both scientists and general readers.”—Kirkus Reviews, Starred Review

“This enchanting book…looks at physics as a continually changing quest for understanding our universe, instead of immutable laws of nature... The essays are a joyous celebration of scientific wonder.”—Publishers Weekly

“Rovelli's enthusiasm for his subject is evident throughout, and his conversational tone brings an often dry subject to vibrant life. For those curious about the natural world and who wonder what actually exists outside Earth's atmosphere, Rovelli's explanations will intrigue and delight.”—Shelf Awareness

“Seven Brief Lessons on Physics is a science book that reads like a poem, and resonates like one, too.”—Bookpage

“Rovelli does a masterful job breaking down complex subjects, like Einstein's theory of relativity and gravitational waves, into simple, easy-to-understand concepts.”—Law 360

“In Seven Brief Lessons on Physics, Carlo Rovelli delivers physics lessons in a most untraditional way, inspiring readers to think differently, to get excited about discovery, to open their minds, to see beauty in the strange... Exquisite... If you love nonfiction and science as much as you love literary fiction, this is a must-read.”—Lovely Bookshelf

“If you want to understand what gets physicists out of bed in the morning, there is no better guide than Rovelli... Seven Brief Lessons on Physics is an absorbing, lovely book... This is physics as romantic poetry and, by God, it’s beguiling”—New Statesman

“Physics has always been popularized, but professor Rovelli’s book is something else: his prose stands out as pristine and seductive at the same time, with all the substance that arouses a real interest in his readers.”—Corriere della Sera

“Plain words can be utterly beautiful when they tell a thrilling story. Carlo Rovelli's words take us on a great adventure as the human mind reaches out to understand the universe. The book is a joy.”—Alan Alda

“Wonderfully clear and vivid. Carlo Rovelli manages to convey the mystery of very large things and very small things with brilliant effect.”—Philip Pullman, author of the His Dark Materials trilogy

“Rovelli has found a new way to talk about science, simple and keen. His seven lessons are as graceful, terse and dreamy as only poetry can sometimes be.”—Paolo Giordano, author of The Solitude of Prime Numbers

“This brief and beautiful introduction to a few key discoveries of modern physics reminds us that the roots of science are curiosity and wonder.”—Lee Smolin, physicist and author, Time Reborn and The Trouble with Physics

“No one should hold office unless they have read Carlo Rovelli's Seven Brief Lessons on Physics.”—Nick Harkaway, author of The Gone-Away World and Angelmaker

“This is a beautiful and moving book that will make you see the world with different eyes.  It is soulfully human and yet full of the wonder of the natural universe. Rovelli somehow conveys the scope and depth of modern physics in everyday language without losing the poetry of the mathematical equations.”—Jenann Ismael, professor of philosophy at University of Arizona