Out of the Easy (Hardcover) 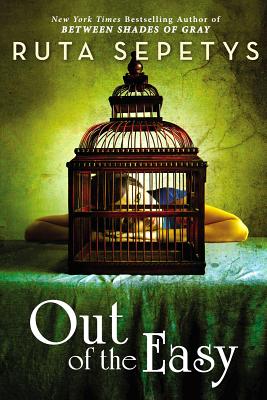 "Out of the Easy
is the story of Josie, a young woman living in the French Quarter of
New Orleans in 1950. Part mystery, part romance, and very readable–I
couldn’t put it down!"

"New Orleans, beautiful and soulful, is one of my favorite cities and I am drawn to tales that take place there. As far as young adult novels go, I found Out of the Easy refreshing. Its unconventional setting and subject matter set the book apart, but its main draw is its characters. They pull you in and compel you to keep reading. The relationship between Josie and Willie, the madam of her mother’s brothel, is particularly interesting and nuanced. These are two fantastically strong female characters who play off each other in surprising ways. It’s a dynamic that reflects the story as a whole – heartfelt and a little off kilter."

"I love New Orleans and will read almost anything having to do with the city. This book takes place in 1950s New Orleans and the city is so vibrantly depicted that I could imagine it with all my senses. Josie, the main character, is also the kind of girl I would like to have as my friend. She’s funny, smart, driven, independent, and an all-around likeable girl. I liked the story, too, for its elements of mystery (there has been a murder!), historical references, and supporting cast of colorful characters."

“This novel has it all: history, humor, heartbreak, and a heroine, Josie Moraine, who will stay with you forever. Set in the French Quarter of New Orleans in the 1950s, this story of a young girl trying to escape an environment where prostitution and petty larceny rule the day features a remarkable cast of characters, not the least of which is Willie Woodley, the madam with a backbone of steel and a heart of gold, who is a better mother to Josie than anyone realizes. Do not miss this book!”
— Anne Holman, The King's English, Salt Lake City, UT

“A haunting peek at the life of a teenage girl in 1950s New Orleans.”--Entertainment Weekly

It’s 1950, and as the French Quarter of New Orleans simmers with secrets, seventeen-year-old Josie Moraine is silently stirring a pot of her own. Known among locals as the daughter of a brothel prostitute, Josie wants more out of life than the Big Easy has to offer. She devises a plan get out, but a mysterious death in the Quarter leaves Josie tangled in an investigation that will challenge her allegiance to her mother, her conscience, and Willie Woodley, the brusque madam on Conti Street.

Josie is caught between the dream of an elite college and a clandestine underworld. New Orleans lures her in her quest for truth, dangling temptation at every turn, and escalating to the ultimate test.

With characters as captivating as those in her internationally bestselling novel Between Shades of Gray, Ruta Sepetys skillfully creates a rich story of secrets, lies, and the haunting reminder that decisions can shape our destiny.

Praise for OUT OF THE EASY

Ruta Sepetys (www.rutasepetys.com) is an internationally acclaimed, #1 New York Times bestselling author of historical fiction published in over sixty countries and forty languages. Sepetys is considered a "crossover" novelist, as her books are read by both teens and adults worldwide. Her novels Between Shades of Gray, Out of the Easy, and Salt to the Sea have won or been shortlisted for more than forty book prizes, and are included on more than sixty state award lists. Between Shades of Gray was adapted into the film Ashes in the Snow, and her other novels are currently in development for TV and film. Winner of the Carnegie Medal, Ruta is passionate about the power of history and literature to foster global awareness and connectivity. She has presented to NATO, to the European Parliament, in the United States Capitol, and at embassies worldwide. Ruta was born and raised in Michigan and now lives with her family in Nashville, Tennessee. Follow her on Twitter @RutaSepetys and Instagram @RutaSepetysAuthor.

Praise for OUT OF THE EASY

“A haunting peek at the life of a teenage girl in 1950s New Orleans.”--Entertainment Weekly

“Like her debut title, Sepetys’s latest is full of transporting writing, drawing you into a past that is fully reconstructed by her superb imagination.”--Boston Globe

* "With a rich and realistic setting, a compelling and entertaining first-person narration, a colorful cast of memorable characters and an intriguing storyline, this is a surefire winner. Immensely satisfying.” --Kirkus, starred review

* “[A]nother taut and charged historical novel… Sepetys has also built a stellar cast. Readers will find Josie irresistible from the get-go and will devour the sultry mix of mystery, historical detail, and romance.”--Publishers Weekly, starred review

* "A Dickensian array of characters; the mystique, ambience, and language of the French Quarter; a suspenseful, action-packed story. With dramatic and contextual flair, Sepetys introduces teens to another memorable heroine."--School Library Journal, starred review

“A page-turner that noir romance fans will gobble up. The legions of fans that Sepetys earned with her best-selling debut novel will all be lining up for this. --Booklist

"Rough-edged and glamorous by turns, this is a wild ride worth taking."--Bookpage

**STARRED REVIEW**  Sepetys follows her debut, Between Shades of Gray, with another taut and charged historical novel, though the setting—the French Quarter of New Orleans in 1950—is a world apart from that of her previous book. Living and working in a bookshop, 17-year-old Josie Moraine dreams of attending college—anything to get away from her mother, a prostitute with Hollywood dreams and a knack for getting involved with the worst men. When Josie becomes involved in a high-profile murder investigation, she becomes even more entrenched in her circumstances. The sensual yet rigidly class-based setting is a real standout, and Sepetys has also built a stellar cast, which includes Willie, a strident but generous madam; Charlie Marlowe, the bookshop’s owner; and a pair of potential love interests for Josie. Readers will find Josie irresistible from the get-go (“The only reason I’d lift my skirt is to pull out my pistol and plug you,” she tells a guy early on) and will devour the sultry mix of mystery, historical detail, and romance.--Publishers Weekly, starred review

**STARRED REVIEW**  Step right onto the rough streets of the New Orleans French Quarter, circa 1950…and meet 17-year-old Josie Moraine, a feisty young woman whose mother, a prostitute in a Conti Street brothel, offers her nothing but scorn and abuse. From the tender age of 12, Josie has made her own way in the world, working in a local bookstore in exchange for a safe place to sleep and cleaning the brothel to earn money toward her planned escape from the Big Easy. Equal parts book smart and street smart, Josie’s dream is to attend Smith College, and she will go to extremes, even blackmail, in her desperation to be accepted. But just when her plans start to gain some traction, her mother strikes again, putting Josie in the middle of a murder investigation and saddling her with a mob debt. There are some meaningful messages here: that love can come from the unlikeliest of sources—the rough-and-tumble brothel madam is much more supportive of Josie than her mother ever was—and that we are all in control of our own destinies if only we choose to be. With a rich and realistic setting, a compelling and entertaining first-person narration, a colorful cast of memorable characters and an intriguing storyline, this is a surefire winner. Immensely satisfying.--Kirkus Reviews, starred review