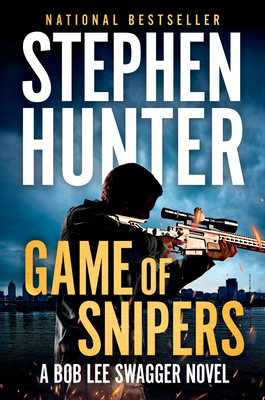 By Stephen Hunter
$27.00
Backordered. Place an order and we will let you know when to expect your book.

With all-too-real threats and a twisty, masterful storytelling, Game of Snipers is another gripping addition to a bestselling Bob Lee Swagger series.

Stephen Hunter is the author of 20 novels and the retired chief film critic for the Washington Post, where he won the 2003 Pulitzer Prize for Distinguished Criticism. His novels include The Third Bullet; Sniper's Honor; I, Sniper; I, Ripper; and Point of Impact, which was adapted for film and TV as Shooter. Hunter lives in Baltimore, Maryland.

“Stellar....Put this one on the shelf next to The Day of the Jackal. It’s that good.”—Publishers Weekly (starred review)

“As always, Hunter's knowledge of rifles and ammunition is central to the story, but it's his narrative skill and grasp of character that give this series its reach well beyond "gun nuts": the depth to the supporting characters is particularly notable here, especially Janet and Juba himself.”—Booklist (starred review)

“The author is a Pulitzer Prize-winning film critic who knows how to tell a crackling good story. Fast-moving, violent, and entertaining, this is genuine good-guy-versus-bad-guy stuff.”—Kirkus Reviews

“Stephen Hunter brought his A-game in a big way here...Game of Snipers is one of the hottest books hitting store shelves this summer.”—The Real Book Spy

“Game of Snipers is a wonderfully written and plotted thriller that I could not put down! Bob Lee Swagger is a true American literary icon and Stephen Hunter somehow continues to bang out one action-packed masterpiece after the next. If you haven't checked in with Bob Lee in awhile, read this book, and you'll see that he's still the man.”—Mark Greaney, bestselling author of Mission Critical

“Game of Snipers is Stephen Hunter at his best!  As someone who has spent time behind the glass, Hunter gets it right! A true master at the pinnacle of his craft.  No one does it better!”—Jack Carr, Former Navy SEAL Sniper and Author of The Terminal List and True Believer