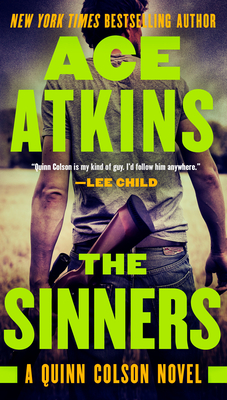 This is book number 8 in the A Quinn Colson Novel series.

In this novel from New York Times-bestselling crime master Ace Atkins, violence comes in many forms...and this time it may be more than Quinn Colson can handle.

The Pritchards had never been worth a damn--an evil, greedy family who made their living dealing drugs and committing mayhem. Years ago, Colson's late uncle had put the clan's patriarch in prison, but now he's getting out, with revenge, power, and family business on his mind. To make matters worse, a shady trucking firm with possible ties to the Gulf Coast syndicate has moved into Tibbehah, and they have their own methods of intimidation.

With his longtime deputy Lillie Virgil now working up in Memphis, Quinn Colson finds himself having to fall back on some brand-new deputies to help him out, but with Old West-style violence breaking out, and his own wedding on the horizon, this is without a doubt Colson's most trying time as sheriff. Cracks are opening up all over the county, and shadowy figures are crawling out through them--and they're all heading directly for him.

Ace Atkins is the author of twenty-three books, including eight Quinn Colson novels, the first two of which, The Ranger and The Lost Ones, were nominated for the Edgar Award for Best Novel (he also has a third Edgar nomination for his short story "Last Fair Deal Gone Down."). In addition, he is the author of seven New York Times-bestselling novels in the continuation of Robert B. Parker's Spenser series. Before turning to fiction, he was a correspondent for the St. Petersburg Times, a crime reporter for the Tampa Tribune, and, in college, played defensive end for the undefeated Auburn University football team (for which he was featured on the cover of Sports Illustrated). He lives in Oxford, Mississippi.

“Mississippi’s rural Tibbehah County—the evocative setting for Ace Atkins’ superior series about Quinn Colson, a former Army Ranger turned sheriff—is the crossroads of all things good and evil...Action-packed...Tibbehah County and the town of Jericho are small areas with big-city problems as Atkins maintains the sense of community that flows through the region.”—Associated Press

More Praise for The Sinners

“The Quinn Colson series just keeps getting better and better. Its blend of country noir and badass humor is as smooth as three fingers of Gentleman Jack....If you like country noir, and you haven’t visited Tibbehah County, you’re overdue for a road trip.”—Booklist (starred review)

“Atkins draws a flawed hero with a strong sense of morality, and he consistently delivers complex relationships, rich internal conflicts and suspenseful action. He's also a master of dialogue, often mining Southern aphorisms for distinctive humor. The Sinners rolls all that into its timely, intense and enthralling plot. There are many sins in the novel, but the greatest would be missing it.”—Shelf Awareness

“With it’s Elmore Leonard-feel and a cast of unforgettable character, this is noir with a deep South edge.”—Parkersburg News and Sentinel