Conscience of a Conservative: A Rejection of Destructive Politics and a Return to Principle (Hardcover) 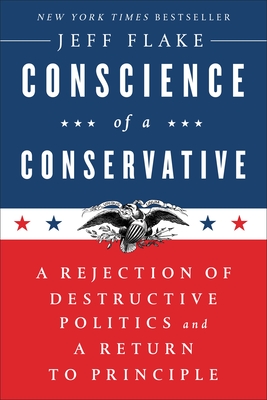 NEW YORK TIMES BESTSELLER • “A thoughtful defense of traditional conservatism and a thorough assault on the way Donald Trump is betraying it.”—David Brooks, in his New York Times column

In a bold act of conscience, Republican Senator Jeff Flake takes his party to task for embracing nationalism, populism, xenophobia, and the anomalous Trump presidency. The book is an urgent call for a return to bedrock conservative principle and a cry to once again put country before party.

I am a conservative.

But today, the American conservative movement has lost its way. Given the state of our politics, it is no exaggeration to say that this is an urgent matter.

The Republican party used to play to a broader audience, one that demanded that we accomplish something. But in this era of dysfunction, our primary accomplishment has been constructing the argument that we’re not to blame. We have decided that it is better to build and maintain a majority by using the levers of power rather than the art of persuasion and the battle of ideas. We’ve decided that putting party over country is okay. There are many on both sides of the aisle who think this a good model on which to build a political career—destroying, not building.

And all the while, our country burns, our institutions are undermined, and our values are compromised. We have become so estranged from our principles that we no longer know what principle is.

America is not just a collection of transactions. America is also a collection of ideas and values. And these are our values. These are our principles. They are not subject to change, owing to political fashion or cult of personality. I believe that we desperately need to get back to the rigorous, fact-based arguments that made us conservatives in the first place. We need to realize that the stakes are simply too high to remain silent and fall in line.

That is why I have written this book and am taking this stand.

Jeff Flake is the junior United States senator from Arizona. He is a fifth-generation Arizonan who was raised on a cattle ranch in Snowflake, a town named in part for his great-grandfather. Prior to his election to the U.S. Senate, Flake served in the U.S. House of Representatives from 2001 to 2013, representing the East Valley. Jeff Flake and his wife, Cheryl, live in Mesa and have five children.

“Conscience of a Conservative . . . is a thoughtful defense of traditional conservatism and a thorough assault on the way Donald Trump is betraying it. . . . Flake is in most ways an ideal public servant. He is an ideological purist but a temperamental conciliator. On spending and free trade he takes lonely principled stands; on immigration he’s crafted difficult bipartisan compromises.”—David Brooks, New York Times

“It’s striking how many influential figures in this slim volume he manages to impale with a stick and then lightly spit-roast. . . . He offers a despairing, unsparing indictment of everyone in Congress who went along with Trump’s election.”—Jennifer Senior, The New York Times

“No major elected Republican has provided a comprehensive critique of Trumpism itself. Until now. Sen. Jeff Flake’s new book, Conscience of a Conservative, is a white-hot indictment of Republican cowardice in the face of a hostile ideological takeover. It also represents the single largest act of political bravery of the Trump era.”—Michael Gerson, The Washington Post

“Flake is correct that the market for the politics of inclusion and expansion has shrunk, and that Trump represents a singular threat to it. With this book, he has put his political career on the line in an attempt to expand it.”—USA Today

“The book attempts to reckon with what conservatism means in the age of Donald Trump, and its power comes from Flake’s probing of his party’s complicity in Trump’s ascendance. . . . It remains true that for all the denunciations of Trump, it isn’t yet clear how rising conservative politicians will map a future in opposition to Trump, and what form a Republican resistance to the drift of the Party might take. Flake’s book is a start.”—The New Yorker

“Flake, a NeverTrumper from the start, has written by far the toughest anti-Trump critique yet to be delivered by a Republican politician currently holding high office.”—New York

“Flake is taking a stance only a few conservatives are willing to take publicly.”—Forbes

“In the most remarkable example of public Trump-bashing, Sen. Jeff Flake of Arizona is taking aim at the president.”—Time

“Flake’s 136-page manifesto pulls no punches. . . . There are humanizing elements and personal reflections throughout that give a glimpse into how his upbringing and faith have shaped his conservative worldview.”—NPR