Law, Legislation and Liberty: A new statement of the liberal principles of justice and political economy (Routledge Classics) (Paperback) 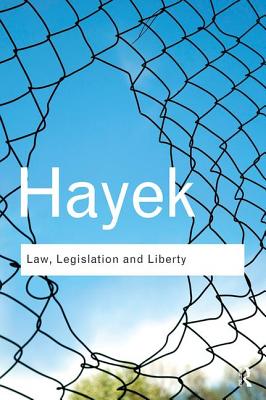 With a new foreword by Paul Kelly

'This promises to be the crowning work of a scholar who has devoted a lifetime to thinking about society and its values. The entire work must surely amount to an immense contribution to social and legal philosophy' - Philosophical Studies

Law, Legislation and Liberty is Hayek's major statement of political philosophy and one of the most ambitious yet subtle defences of a free market society ever written. A robust defence of individual liberty, it is also crucial for understanding Hayek's influential views concerning the role of the state: far from being an innocent bystander, he argues that the state has an important role to play in defending the norms and practices of an ordered and free society. His arguments had a profound influence on the policies of Thatcher in the 1980s and resonate today in visions of the 'Big Society'.

First published in three separate volumes, this Routledge Classics edition makes one of his most important books available in a single volume. Essential reading for understanding the background to the recent world economic turmoil and financial crisis, it also foreshadows the subsequent heated debate about regulation and political governance if such disasters are to be avoided in the future.

F. A. Hayek (1899-1992) was one of the most influential and controversial political and economic thinkers of the Twentieth Century. He taught at the London School of Economics and the University of Chicago and was awarded a Nobel Memorial Prize in Economics in 1974. His The Road to Serfdom is also available in Routledge Classics.