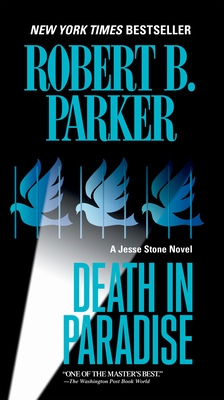 This is book number 3 in the A Jesse Stone Novel series.

“[Parker's found] the pitch-perfect voice for a guy who is straining every muscle to cut down on the booze, hang on to his new job as police chief, and not get rattled by the body of a teenage girl”(The New York Times) in this bestselling mystery in the Jesse Stone series.

Robert B. Parker takes readers back in Paradise, where Detective Jesse Stone is looking for two things: the killer of a teenage girl—and someone, anyone, who is willing to claim the body...

The local cops haven't seen anything like this, but Jesse's L.A. past has made him all too familiar with floaters. This girl hadn't committed suicide; she hadn't been drowned: she'd been shot and dumped, discarded like trash. Before long it becomes clear that she had a taste for the wild life; and her own parents can't be bothered to report her missing, or even admit that she once was a child of theirs. All Jesse has to go on is a young man's school ring on a gold chain, and a hunch or two.

Filled with magnetic characters and the muscular writing that are Parker's trademarks, Death in Paradise is a storytelling masterpiece.

Praise for Death in Paradise

“Stone is a deceptively complex character, one whose problems are both interesting and completely believable…another strong effort in what is already an impressive series.”—Library Journal

“Beautifully wrought...[an] immensely satisfying tale. Rarely if ever has Parker’s fiction conveyed with solemn intensity the challenge of living a good life in a world of sin. The book’s ultimate pleasure lies in the words, suffused with a tough compassion won only through years of living, presented in prose whose impeccability speaks of decades of careful writing.”—Publishers Weekly (starred review)

“What’s so cool about Death in Paradise is watching Jesse Stone’s relentless pursuit of the bad guy.” —St. Petersburg Times

“Hard-hitting...and brutally frank...Parker reinvents, revises and reincarnates the hardball, tough-guy, deadpan mysteries of Raymond Chandler and Dashiell Hammett. Death in Paradise is a tough, clear-eyed, sardonic look at life and the raw deals it can dish out.”—The Providence Sunday Journal

“If you love Parker, you’ll love this book. Jesse Stone is clearly in the Parker style.”—Calgary Herald

“[Parker’s] gift for creating engaging characters and involving the reader in their fate makes this...well worth your attention.”—The San Diego Union-Tribune