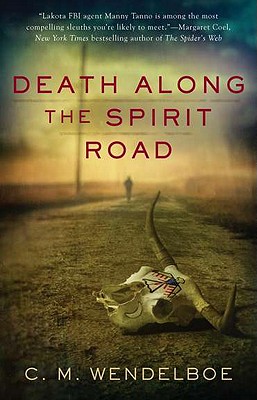 This is book number 1 in the Manny Tanno series.

First in a new series featuring FBI agent Manny Tanno- a Native American returning to the reservation home he thought he left behind.

The body of local Native American land developer Jason Red Cloud is found on the site for his new resort on the Pine Ridge Reservation. A war club is lodged in his skull-appearing as if someone may have performed a ritual at the crime scene.

FBI Special Agent Manny Tanno arrives in Pine Ridge to find that not everything has changed since he left. His former rival, now in charge of the Tribal Police, is just as bitter as ever, and has no intention of making Manny's life easy. And the spirit of Red Cloud haunting Manny's dreams is not much help either, leaving him on his own in hunting down a cold-blooded killer-and one misstep could send him down the spirit road as well..

C. M. Wendelboe is a retired lawman. He began his law enforcement career shortly after his discharge from the Marines. In the 1970s, he worked in South Dakota towns bordering three Indian reservations, including Pine Ridge.