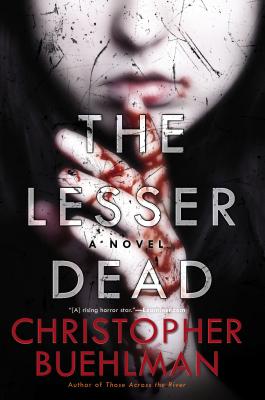 By Christopher Buehlman
$25.95
Backordered. Place an order and we will let you know when to expect your book.

As much F. Scott Fitzgerald as Dean Koontz (#1 "New York Times" bestselling author Patricia Briggs), Christopher Buehlman excels in twisting the familiar into newfound dread in his genre-bending ("California Literary Review") novels. Now the acclaimed author of "Those Across the River "delivers his most disquieting tale yet...
"The secret is, vampires are real and I am one.
The secret is, I m stealing from you what is most truly yours and I m not sorry... "
New York City in 1978 is a dirty, dangerous place to live. And die. Joey Peacock knows this as well as anybody he has spent the last forty years as an adolescent vampire, perfecting the routine he now enjoys: womanizing in punk clubs and discotheques, feeding by night, and sleeping by day with others of his kind in the macabre labyrinth under the city's sidewalks.
The subways are his playground and his highway, shuttling him throughout Manhattan to bleed the unsuspecting in the Sheep Meadow of Central Park or in the backseats of Checker cabs, or even those in their own apartments who are too hypnotized by sitcoms to notice him opening their windows. It's almost too easy.
Until one night he sees them hunting on his beloved subway. The children with the merry eyes. Vampires, like him or not like him. Whatever they are, whatever their appearance means, the undead in the tunnels of Manhattan are not as safe as they once were.
And neither are the rest of us.

Christopher Buehlman is the winner of the 2007 Bridport Prize for Poetry and the author of four novels, including "The Necromancer's House," "Between Two Fires," and "Those Across the River," and several plays. He spends half the year in St. Petersburg, Florida, and the rest on the road.

Praise for The Necromancer’s House

“[An] eruption of characters who evoke Dickensian whimsy and range from the merely unusual to the bizarrely imaginative...an explosion of enthralling fantasy. [A] vibrant, bracing atmosphere.”—Publishers Weekly (starred review)

“You find yourself believing the unbelievable and fearing what you thought belonged only in those Old World, pre-sanitized fairytales."—Andrew Pyper, author of The Demonologist

Praise for Between Two Fires

"Cormac McCarthy's The Road meets Chaucer's Canterbury Tales in this frightful medieval epic...Buehlman...doesn't scrimp on earthy horror and lyrical writing in the face of unspeakable horrors...an author to watch."—Kirkus Reviews

“I was spellbound from the moment I opened the front cover…Intense and chilling…The ultimate good-versus-evil battle.”—Night Owl Reviews

“Fans of historical fantasy and horror will find this epic darkly rewarding.”—Publishers Weekly

Praise for Those Across the River
One of Publishers Weekly’s Top-Ten SF, Fantasy & Horror Novels
A World Fantasy Award Nominee for Best Novel

“Beautifully written…with a cast of Southern characters so real you can almost see the sweat roll down the page. The ending is exceedingly clever.”—Boston Herald

“Wonderfully eerie from start to finish—a novel sure to enthrall readers of all stripes.”—Grant Blackwood, #1 New York Times bestselling author

“An unsettling brew of growing menace spiked with flashes of genuine terror—do not miss this chilling debut. Christopher Buehlman is a writer to watch. I look forward to hearing from him again. And soon.”—F. Paul Wilson, New York Times bestselling author

“Seduces you with eloquent prose and sensual period details, then clamps down on your jugular…An outstanding debut.”—Hank Schwaeble, Bram Stoker Award–winning author of Diabolical

“A horror story that manages just the right balance between building dread and suspense and delivering action.”—The A.V. Club

“Sublimely crafted...It is clear that Mr. Buehlman brings his poetic background to bear in creating the rhythm and meter of the story…A well-crafted novel that is a pleasure to read.”—The New York Journal of Books

“Masterful debut novel…moody and lush…[a] spellbinding tale of terror…filled with cowardice and bravery, foolishness and wisdom, grief and grace, and, alas, helplessness and beauty. Buehlman has written one of the best books of the year.”—Shelf Awareness

“Creepy, suspenseful...Recommended for horror fans and those willing to be scared enough to want to stay out of the woods.”—Library Journal

“In its unnerving depiction of small-town creepiness and heathen savagery, this surefooted debut resembles nothing more than Thomas Tryon’s Harvest Home…Viscerally upsetting…This is lusty, snappy writing, and horror fans will eat it up (or vice versa).”—Booklist

“Buehlman packs suspense and secrets into his debut novel…keep[s] readers on their toes right up until the big reveal.”—Publishers Weekly

“Fans of novels like Salems’ Lot or classic radio dramas will find this story impossible to put down…[It] feels completely fantastical by our rational minds but believable by our deepest fears.”—Suspense Magazine