What You Break (A Gus Murphy Novel #2) (Paperback) 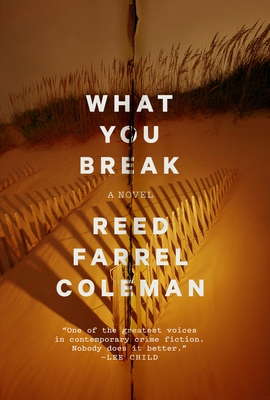 By Reed Farrel Coleman
$16.00
On Our Shelves Now

This is book number 2 in the A Gus Murphy Novel series.

Former Suffolk County cop Gus Murphy returns to prowl the meaner streets of Long Island's darkest precincts, with a Russian mercenary at his back, in the stunning second installment of Reed Farrel Coleman's critically acclaimed series, now in paperback.

Gus Murphy and his girlfriend Magdalena are put in harm's way when Gus is caught up in the distant aftershocks of heinous crimes committed decades ago in Vietnam and Russia. Gus's ex-priest pal, Bill Kilkenny, introduces him to a wealthy businessman anxious to have someone look more deeply into the brutal murder of his granddaughter. Though the police already have the girl's murderer in custody, they have been unable to provide a reason for the killing. The businessman, Spears, offers big incentives if Gus can supply him with what the cops cannot—a motive.

Later that same day, Gus witnesses the execution of a man who has just met with his friend Slava. As Gus looks into the girl's murder and tries to protect Slava from the executioner's bullet, he must navigate a mine field populated by hostile cops, street gangs, and a Russian mercenary who will stop at nothing to do his master's bidding. But in trying to solve the girl's murder and save his friend, Gus may be opening a door into a past that was best left forgotten. Can he fix the damage done, or is it true that what you break you own...forever?

Reed Farrel Coleman, called "a hard-boiled poet" by NPR's Maureen Corrigan and the "noir poet laureate" in the Huffington Post, is the Edgar-nominated author of twenty-five novels and three novellas, including the critically acclaimed Moe Prager series. A three-time winner of the Shamus Award, he has also won the Anthony, Macavity, Barry, and Audie awards.

“Coleman writes some of the best prose in modern crime fiction…stunning.”—Booklist

“Outstanding....Coleman doesn’t pull any punches or settle for pat character arcs in presenting a realistically flawed Gus, who realizes that his morality “was not so much a search for the truth as a set of rationalizations that let [him] sleep at night.”—Publishers Weekly (starred review)

“First-rate…[a] deft mix of corrupt cops, gangbangers, drug dealers and makers of “ghost guns.” And the scruffy side of Suffolk County (read: not the Hamptons) has rarely been captured more colorfully.” –Chicago Tribune

“Told in vivid prose mingled with hard-boiled action, Coleman continues to evoke the sensibilities of a bygone era of crime writers. No one today is doing this better.”—Deadly Pleasures

“Long Island has its own laureate of the LIE in the form of Reed Farrel Coleman and his hard-bitten sleuth Gus Murphy….It’s not just the details Coleman gets right, it’s the whole structure of class, race and money…the climax…is a corker—tensely narrated and genuinely dramatic. And Coleman has the cunning to leave much of Gus’ past clouded in secrecy, ripe for future revelations—and adventures.” –Newsday

“A gripping and beautifully crafted novel about a fascinating character whose complexities and observations about life elevate the novel beyond its genre.” –The Huffington Post


“What You Break by Reed Farrel Coleman is the sort of novel which rises above the crowded pool of thriller books and shines as a star…stunning…a masterpiece!” –Mystery Tribune

“With Gus Murphy, Reed Farrel Coleman has created one of the most complex and dangerous series heroes of the 21st century.” –MysteryPeople

“[Coleman] is at the top of his game….Reading a Reed Farrel Coleman book is surrendering your mind to a master teacher.”—Huffington Post

“Coleman delivers an action-packed thriller strengthened by solid character studied. The brisk plot delves into the dark corners of Long Island and the people who live there….Coleman’s affinity for involving plots elevates What You Break and shows why he has just been nominated for an Edgar Award for the first novel in the series….What You Break is strongest when Coleman takes a tour of Suffolk County, showing the seedy and the affluent areas. Gus’ existential musings illustrate his complicated personality and show why he is worth rooting for.” –SouthFlorida.com


Praise for Where It Hurts

“A gut punch of a novel, a murder mystery layered with grief, greed, and grit. Coleman is as good as Chandler, Hammett, or Ed McBain.”—Nelson DeMille

“One of the greatest voices in contemporary crime fiction, and one of the best storytellers, too. I loved this book. Nobody does it better.”—Lee Child

“Superb . . . another standout series . . . in Coleman’s hands, all the standard elements seem as radiant and new as a freshly peroxided blonde. . . . Where It Hurts is one of those evocative mysteries that readers will remember as much for its charged sense of place as for any of its other considerable virtues.”—The Washington Post

“Gus . . . is absolutely one of genre veteran Coleman’s best-drawn characters. . . . He meets his tragedy and its consequences with a considered straightforwardness, and his desire for justice reawakens in time with the investigation’s quickening tempo, hopefully signaling the start of a series.”—Booklist (starred review)

“Coleman has long been one of the best crime novelists in the business. . . . Where It Hurts is a superb detective novel in the Raymond Chandler tradition, featuring fine prose, a suspenseful yarn and a compelling main character who will leave readers hungering for the next installment.”—Associated Press