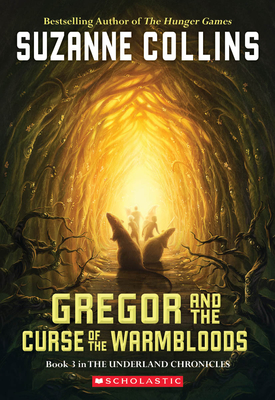 This is book number 3 in the The Underland Chronicles series.

In the third installment of Suzanne Collins's New York Times bestselling The Underland Chronicles, Gregor must stop a plague from spreading through the Underland.With two prophecies fulfilled, Gregor is now focused on the Prophecy of Blood, which calls for Gregor and "the princess," Boots, to return to the Underland to help ward off a plague. His mom agrees to let them go--on the condition that she travels with them.When they arrive in the subterranean city, the plague is spreading--and one of Gregor's family is stricken. Only then does he understand his role in the prophecy. He must summon all his power to end the biological warfare, or the warmblood creatures of the Underland will die.The adventure continues in the third book in Suzanne Collins's New York Times bestselling middle grade series.

Suzanne Collins is the author of the bestselling Underland Chronicles series, which started with Gregor the Overlander. Her groundbreaking young adult novels, The Hunger Games, Catching Fire, and Mockingjay, were New York Times bestsellers, received wide praise, and were the basis for four popular films. She returned to the world of Panem with The Ballad of Songbirds and Snakes. Year of the Jungle, her picture book based on the year her father was deployed in Vietnam, was published in 2013 to great critical acclaim. To date, her books have been published in fifty-three languages around the world.